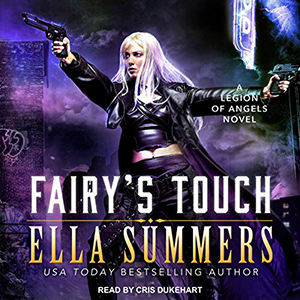 The games of gods play out upon the backbones of mortals.

Leda Pierce has come a long way since she left her home on the frontier of civilization one year ago to join the Legion of Angels. She is a soldier in the gods’ army, has crossed swords with demons, and shares an apartment with her angel lover in New York.

Every day brings Leda closer to becoming an angel herself—until a promotion ceremony goes horribly wrong, leaving her powers in magical limbo. Worse yet, the gods have taken over her training at Crystal Falls. Leda’s failed magic and the gods’ impossible challenges are the least of her worries, however. Someone is using the challenges to expose people’s most-guarded secrets, and the skeletons in Leda’s closet would mean her execution.

As the training at the Legion of Angels intensifies, it takes an unexpected turn when their trainers are actually the gods. With all the secrets Leda has to hide, working with the gods is going to be tough. With Fairy’s Touch, the ability to read minds is available to everyone. How do you keep secrets even you can’t even THINK about them? An interesting note is that Nero is also included in this special training. However when the gods pair them all up, you can tell there is a special purpose behind the training.

I love this series. I love the audio. I waited SO long for the audios of these last few books to be released! I am drinking them up like water now! The challenges and hurdles that Leda and Nero have to overcome keep you glued to your earbuds. The gods are always so tricky you never know if they next thing they do to you is to kill you. You are always on your toes trying to figure out what the god’s objective is.

Fairy’s Touch leaves nothing untouched. We see gods, angels and soldiers all endure some type of problem. It may not seem possible, but even MORE secrets are revealed! I hated when the book ended and was SO ready to jump into the next one. The ending includes a big surprise so be ready!