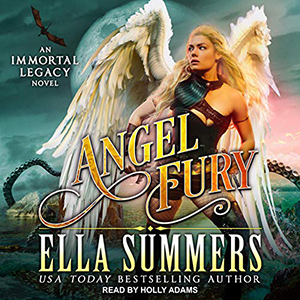 Cadence Lightbringer, daughter of a legendary archangel, has always known her gods-endowed magic comes with a price. As an angel in the Legion of Angels, she lives where the Legion commands her to live, trains how the Legion tells her to train, and marries whom the Legion instructs her to marry.

Somehow it all sounded simpler in her head.

When Cadence is ordered to marry the enigmatic angel Damiel Dragonsire, a man she hardly knows, her whole perfect, predictable life is turned upside down. The wedding, however, is cut short by a dark threat that throws Cadence and Damiel into a world of magic as ancient and deadly as the original Immortals, powerful deities who once ruled the entire known universe.

Book two of the Immortal Legacy series takes us into unknown territory. We are taken to another realm where Cadence and Damien are trying to save the Hive. We get a lot of surprises. Meeting up with old foes, and even friends alike. Who can be trusted?

Cadence and Damien move quickly from scene to scene where their limits are tested. The couple grows closer, so I was excited to see the romance grow. I think Damien’s hardened skin is starting to soften.

I did enjoy Angel Fury a bit more than the first book. I think because I was more familiar with the characters now that I knew who was who. There was probably a little bit of “first book syndrome” that I always get at the beginning of a series. Despite reading this series after Legion of Angels, I still felt out of sorts with book one. Angel Fury had me more comfortable with the characters and more involved with the story.