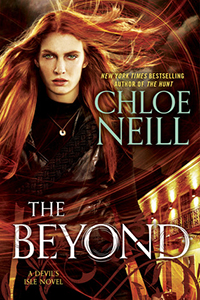 Sensitive Claire Connolly must journey to another world in the electrifying fourth installment of Chloe Neill's post-apocalyptic urban fantasy series.

It's been a year since the Veil between the human world and the world Beyond was torn apart, and war began again. Sensitive Claire Connolly and bounty hunter Liam Quinn have been helping their human and paranormal allies fight back against the ravaging invaders and save what's left of New Orleans.

But a new enemy has arisen, more powerful than any they've seen before, and even Devil's Isle cannot hold her. . .

When Claire learns of a new magical weapon—one built by paranormals themselves—she knows it could turn the tide of war. But to reach it, she and Liam will have to cross into the Beyond itself. In a world full of hostile magic and dangerous foes, she'll have to channel the powers she once kept hidden in order to survive. New Orleans hangs in the balance, and the storm is growing closer...

The Beyond by Chloe Neill is book 4 and the final book in the Devil’s Isle series. We start off a few months from the ending of book 3 where a tear is created between the worlds that have unleashed more paranormals. The structure in New Orleans has changed and the Consularis paras have been released from Devil’s Isle to help against the war with the Court of Dawn.

In The Beyond, Claire and Liam continue their relationship as the Seelies put their plan to tear down New Orleans into action. To stop them, Liam, Claire, Malachi, Rachel and Gavin must travel into the tear to retrieve a para piece that could help create a weapon.

The city, as well as the group take some pretty bad hits. I was wondering how much of New Orleans was going to be left before Claire and her friends could get an upper hand against the Seelies. Their plan, despite all that they endure to fulfill it, is not a sure thing. The final stand with the Seelies had me holding my breath, praying that their plan would work. They had to depend on it at a vital moment and things could easily go wrong.

I was really pleased with the progression of Claire and Liam’s relationship in The Beyond. Especially with the way the series ended and the potential of what lay ahead for them so positive. I felt like there was growth in Claire which helped me deal with the impression I had of her as younger than I would normally read. I did feel bad for the character’s losses so I was happy that she had developed relationships with so many and the group becomes like their own little family.

The Beyond was a really fun read that had my adrenaline going and trying to read fast in hopes that the group could save the city. There was so much devastation and the potential for totally wiping out the city was strong. I was really worried that Claire and friends were not going to make it or that their plan was not going to be effective.

The ending of the book and series was definitely satisfying. I will miss these characters and the relationship potentials that were left as just that, potentials. However, I did feel like Claire’s personal issues were pretty well tied up. I was left feeling like I had been through a great adventure and was definitely happy with the ending.

They were tall, short. Dark, pale. Big, small. Old, young. Magic was the thing they had in common—their unique sensitivities to the power that had crept into our world from the Beyond, the world of Paras. One could freeze matter, one could call animals, and one could communicate telepathically.

Their powers were new, and they were untrained. I was here not to teach them how to use their magic, to make them better at freezing or calling, but to help them stay sane.

Once upon a time, the Veil—a ribbon of magic that separated the Beyond from the human world—had kept the magic on their side. Nearly eight years ago, the Paras tore it open, ravaging the southern U.S., including New Orleans. Sensitives had helped magically sew it shut again, even if a little power had seeped through the stitches. But humans, being humans, had made a very bad mistake, and it had been ripped apart again. This time, it left a mile-long gap, and magic and Paras had been streaming into our world ever since.

A few “lucky” humans could sense that power, use it. About seven percent of the population, as far as Containment could tell. But human bodies weren’t built for the burden of otherworldly energy. Too much magic warped bone and broke down muscle, turning Sensitives into skeletal wraiths whose only desire was the very magic that degraded them, even if they had to kill to get it. And there was no coming back from wraithdom.

I was teaching these Sensitives to find balance, to keep the right amount of magic spooled in their bodies. Enough to use if necessary, but not so much that it overwhelmed and broke them. This was the fourth group I’d trained since the Veil had been breached. Forty people who were willing to admit to their condition and get help for it. Probably not everyone affected. But I couldn’t make anyone face their demons. Even if that meant they’d face them as wraiths later.

We stood in the pulsing heat on a greenway in Devil’s Isle, the neighborhood-turned-prison-turned–neighborhood for Paranormals. It had been the Fabourg Marigny, had become a prison for all Paranormals, and now served as a prison for some and a refuge for others, because humans had acknowledged not all magic—and not all Paranormals—were evil. It was only after the Veil had been opened again that the former Paranormal Combatant Command, and its Containment unit that operated Devil’s Isle, had finally admitted there were two groups of Paranormals, and only one group was our enemy. The Court of Dawn led the war; they’d magically conscripted their enemies, the Consularis, to fight.

Containment had allowed the Consularis to leave Devil’s Isle if they’d wanted to, but kept the Court imprisoned. And as Court members slithered into our world again through the breach in the Veil, many of the freed Consularis Paras had stayed to fight. The PCC had become the Unified Combat Command, humans and Consularis Paras bound together to fight the Court of Dawn.

And fight we had. It was good they were still outside the perimeter that Containment had been able to establish around New Orleans. But that had been a matter of will as much as of strength. Cracks of magic and pops of ammunition rolled like thunder across the city, which was down to military personnel and the thousand or so hardy humans who’d refused to leave their homes. But we’d stay as long as we could. As long as we could hold New Orleans.