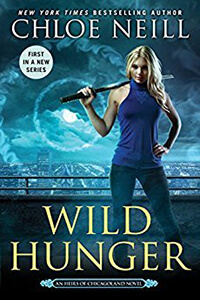 As the only vampire child ever born, some believed Elisa Sullivan had all the luck. But the magic that helped bring her into the world left her with a dark secret. Shifter Connor Keene, the only son of North American Central Pack Apex Gabriel Keene, is the only one she trusts with it. But she's a vampire and the daughter of a Master and a Sentinel, and he's prince of the Pack and its future king.

When the assassination of a diplomat brings old feuds to the fore again, Elisa and Connor must choose between love and family, between honor and obligation, before Chicago disappears forever.

Wild Hunger is the first in the spin off series from Chicagoland Vampires by Chloe Neill. I will admit I was hesitant to read this as I was worried that this would be more NA than adult. Our heroine is very young and I didn’t think Neill would make too big of a jump into the future before starting off with Elisa’s story.

Elisa is back in Chicago after schooling and serving another House in Paris. Her trip starts out as her being part of delegation with duties to protect the delegates of the House she has devoted herself too for the next year. However, her Chicago roots go deep as well as her devotion to her friends. When all is threatened, she is faced with the choice of staying out of it and sticking with her Paris House or defending what she was born into. Elisa also has a secret that she’s been fighting. She trusts only one person with this knowledge as he has seen it and unbeknownst to her, understands it. It is with his help that Elisa starts to learn how to use the secret she has to work with her instead of against her.

It was definitely interesting to meet Elisa, Lulu and Connor all grown up. They all still have a lot of growing up to do which is why I got the NA feel from the book. There is a potential romance line in there but it is very remote so if it grows it will be a slow growth. I think with each installment, Neill will likely pit these characters in situations that will make them have to grow and learn a little more about themselves. I think the maturity level of the characters is why I have such a hard time reading NA, which I felt Wild Hunger was. I am curious enough to want to know what decisions Elisa makes for her life now that Chicago is safe. It will be good to grow with the characters and be a part of what impacts their lives. I need to keep reminding myself that this is UF and NOT PNR. I have a terrible time when I don’t have a good romance/action balance and I’ve been reading a lot of PNR lately so the switch was a little more difficult than I expected. I think I may have also suffered a bit of Book One Syndrome, despite being familiar with some of the secondary characters.

I did enjoy Wild Hunger and thought that the action and adventure made a great start to the series. I do have the curiosity to see how things continue on with these characters, so it is very likely I will pick up the next in the series. I love the adventure Chloe Neill brings us.