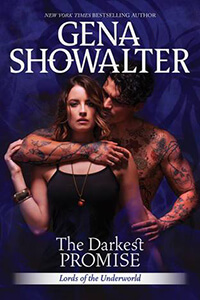 Possessed by the demon of Misery, Cameo isn't allowed to experience joy. If she dares, her memory is wiped clean. With no other recourse, she sneaks into a land more fantastical than any fairy tale, determined to find the one man with the key to her redemption.

Lazarus the Cruel and Unusual rules his kingdom with a single unwavering focus: to build his army and annihilate his enemies. Nothing distracts him—until Cameo. He is relentless in his quest to make her smile…and seduce her into his bed.

As dark forces conspire against them, threatening to destroy the fragile bond they've forged, the once-calm Lazarus grows crazed. Every heart-stopping kiss and wicked touch causes Cameo to teeter on the brink of happiness. But if she falls, she risks forgetting him forever…

I can’t believe it has taken me this long to read this book. I’m normally right on top of this series, but I’ve found that I’ve fallen behind in both the books of the Lords of the Underworld as well as Immortals After Dark. I’m ashamed. I’m such a fangirl of Gena Showalter and Kresley Cole so it is crazy that I’ve let this happen.

Now, I’ve ordered Darkest Promise in hardcover when I saw that it was out because I have the hardcover for Darkest Warrior and I felt like it needed a companion format. I haven’t looked yet to see if the HC contains all the extras that the ebook has. All those extras came in SO helpful.

There were moments in The Darkest Promise that I was a little confused, because I didn’t remember events from previous books. Gena helps with that at the end of the story with an addition of a bullet point view of each book so far. That is where I kind of got caught up. I sort of wish that that addition had of been at the beginning at the book, but at least I have an idea of a timeline before going into The Darkest Warrior.

Due to my lack of memory on other character’s storylines, I concentrated on our main couple. Lazarus had some great powers and I loved seeing the things he could do to his enemies. No, I’m not cruel and unusual, but his little garden fascinated me. It was interesting to see how little he knew about his condition. But I guess if he really understood it, there really wouldn’t have been as much urgency in his relationship with Cameo. It was not hard to tell that the two were fated to be together since Misery did not affect Lazarus the way it did others. I think Cameo’s surprise at that helped her to feel closer to him and moved their relationship along a little farther.

I wish I could remember what caused Cameo to lose her memory of her original time with Lazarus. I can’t even recall which book contained their previous relationship, if it was even written. A reread may be in order for this series I think. I know I loved them, and friends I’ve recommended the series to have loved it too. It is just so hard for me to reread. I think that is why I liked that bullet point book refresh add-on.

The Darkest Promise seemed to focus heavily on Cameo and Lazarus’s relationship. There didn’t seem to be a lot of movement in the war between Lucifer and Hades. We get little glimpses like someone was injured in a fight or someone was in that realm fighting, but we didn’t really get battle scenes.

I loved the Cameo that Lazarus revealed. She was funny and witty. I loved that she decided Viola was her BFF. That chick is hilarious. I know Viola’s demon makes her say a lot of what she says, but I can’t help but laugh at her. What I didn’t realize was how her demon really affected her. How much hurt she endured because of the demon’s actions. I also love her Tazmanian Devil. Cameo is truly a kick-ass heroine but when things get tough she doesn’t hesitate to use her demon. Even if it means her demon takes control.

In the Darkest Promise, both Cameo and Lazarus are forced to fight not only the outside forces, but forces within themselves as well. They both need to be strong. There is a great scene where Lazarus helps Cameo fight her demon. I got a good laugh from it and how it brought everyone out. I have been in a bit of a reading slump, so the book seemed to go a little slow for me, but I still loved the characters. Both characters made me laugh and had some exciting adventures.

I’m excited to get to The Darkest Warrior and learn more about Puck. I don’t remember a lot about him from previous appearances. I hope I can accept his relationship with Gilly.

My love for the Lords of the Underworld continues!