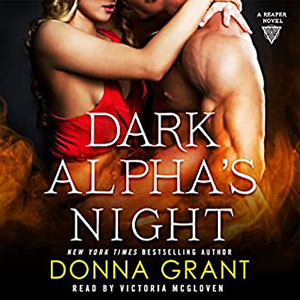 There is no escaping a Reaper. I am an elite assassin, part of a brotherhood that only answers to Death. And when Death says your time is up, I am coming for you...

I answer to no one but Death. I am impenetrable, impervious, immortal. I exist to do Death's bidding and no one--not Reaper nor human nor Fae--can stand in my way. But I've been called from another realm by a woman so stirring, beautiful, enigmatic, that I can't help but be drawn to her. I shouldn't get involved with this woman. But anyone kidnapped by a Dark Fae needs my protection. Especially when she's hooked me, body and soul...

Dark Alpha’s Night features Ettie & Daire. Daire used to be the one following Rhi, but now that is no longer needed he is assigned to watch a half fae named Ettie. She has two siblings, who were also half fae (the family was visited by multiple light fae or just the same fae three times?)

There is a connection between Ettie and Bran which has the Reapers trying to figure out Bran’s motives. Daire connects with Ettie and together they come up with ways to set Bran up. For some reason Bran is determined to take everything Ettie and her sisters have. She just needs to sign it over. This confuses the Reapers wondering just what it is he is looking for.

I was really nervous when Ettie confronts Bran thinking she has the support of the Reapers, but none appear to aid her. It was heartbreaking until she finally learned the truth. But now they know another thing that Bran can do, so the Reapers will be prepared.

But still the question remains, just what is Bran looking for? Also, despite Death’s disappearing act, she makes an appearance to acquire just what Bran is looking for.

I was concerned about the relationship between Ettie and Daire. I thought he had a thing for Rhi for awhile, so it surprised me when he so willingly took this new assignment. I’m not reading these in order with the Dark Kings, so some things kind of lose me and I have to remember if what they are talking about happened in a Dark King book. But I was pleased with the strength that Ettie showed and how she proved to be a match for Daire.