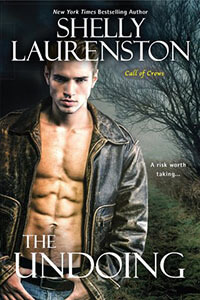 A risk worth taking…

No one would ever accuse Jace Berisha of having an easy life—considering her husband…you know…killed her. But that was then! Now she fights for mighty Viking gods with the spectacular and vicious Crows.

But things are turning very bad, very quickly because a vengeful, ancient goddess has come into the world with just one thing on her mind—ending it. And the only way they can hope to stop her is if the Crows join forces with their one-time enemies, the Protectors. A Viking Clan created to do nothing but kill every Crow they see.

Thankfully, Protector Ski Eriksen is a peace loving kind of guy. Because the woman he is desperately trying to get close to is the beautiful and not-very-chatty Jace. Battling Nordic clans? Unkillable goddesses? Jace’s mean-spirited dog? None of these things would ever get in the way of a true Viking!

I really enjoyed The Unleashing, so was excited to get my hands on the Undoing! The Crows are a favorite species of mine. I think next to Valkries. They are just so hard on each other to the point of being funny. Erin is hysterical. She gets a good beating, but she’s right back out there again trying to screw with your head. You gotta love her.

The Undoing is Jace’s story. Her journey to being a Crow was pretty harsh. I was a bit confused because I thought as far as family and friends knew, when you became a Crow, it was because you were dead. I didn’t realize that people might still know you were alive. This threw me a little bit when we go through a bit of the story that includes Jace’s past.

Jace is me. She is not interested in all the games and rowdiness the other girls are into. She will hide away with her book and puppy (another reason I love her) and a good book. She’s not so much anti-social as introverted. That along with her extensive knowledge of languages brings her into the employ of the Protectors.

The owly Protectors are favorites of mine too. They are book-obsessed and are scared of anything that might damage a book. The whole turning their head 360 degrees kind of freaks me out, as well as the description we sometimes get about their eyes. They are not as big on the physical fighting as the Ravens or other clans, but they are a “hoot” at a party. You knew that was coming didn’t you?

We of course have our romance storyline, but we also have the two action plots. Both involve bringing back past mistakes. These Clans are all powerful, and are tough in their own right. But when you put them all together, they can kick some ass.

This world is a lot of fun. The characters are over the top enough to be funny, but tough enough to make the fight scenes believable. I’m excited to continue in this world. I had some really great laughs and some moments of holding my breath to see what was going down. Overall, I would definitely recommend this series.