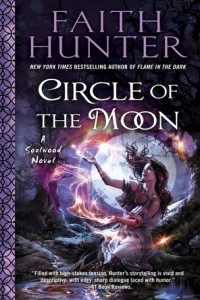 Nell can draw magic from the land around her, and lately she's been using it to help the Psy-Law Enforcement Division, which solves paranormal crimes. Joining the team at PsyLED has allowed her to learn more about her powers and the world she always shunned--and to find true friends.

Head agent Rick LaFleur shifts into a panther when the moon calls him, but this time, something has gone wrong. Rick calls Nell from a riverbank--he's naked, with no memory of how he came to be there, and there's a dead black cat, sacrificed in a witch circle and killed by black magic, lying next to him.

Then more animals turn up dead, and team rushes to investigate. A blood-witch is out to kill. But when it seems as if their leader is involved in the crime, the bonds that hold the team together could shatter at any moment.

Circle of the Moon is the fourth book in the Soulwood series. There are lot of things here that could be spoilers for the previous books so if you haven’t read them, beware.

In this installment, we have someone doing a calling spell that seems to be affecting Rick. It’s a huge puzzle trying to figure out not only who is doing this spell, but also why. The PsyLED team has a couple of people join them in their search for answers, but can they be trusted? We are treated to some non-stop action throughout the book. Something is constantly happening and the team must be on their toes.

Not only does Nell have to deal with everything that is happening at work, she is still in the process of bringing her sister, Mud, home to live with her. She must deal with childcare, creepy men wanting to marry Mud and Mud’s plans for when she moves in. Nell also has to deal with some feelings she is starting to have for Occam. A lot of things are happening to bring her out of her church ways.

There was SO much to this story that you can’t help but stay transfixed to the book. There is a lot of reference to the Jane Yellowrock series. I thought that it might have been beneficial in understanding some of the dynamics to have read that series. It can be read without, though, as there is certainly enough happening in the present to keep your mind occupied. Circle of the Moon is a really great mystery with lots of action. I am still quite unfamiliar with Nell’s gifts, and some of the problems she deals with because of it. Hopefully I will understand more as I continue to read.

Read below for a glimpse at Circle of the Moon and don’t forget to enter the giveaway where 5 people will win copies of the first two Soulwood books as well as one lucky winner of a $50 Amazon gift card!

Tandy was watching Rick’s careful movements. “Are you hurt?”

Even I could tell Rick was lying, but Tandy didn’t call him on it, saying instead, “Do you think we can wait until they get back to address the issue of the local LEOs not alerting us to the presence of a black-magic user in the area?”

“No. I don’t. I’d like Ingram to call her friend at the FBI and prime the pump.”

“Sure you do. In your report you described her as a ‘Coffee addict going on a four-hour withdrawal. Dark-skinned, African-American female FBI agent, jacket and pants, hair cropped close. History of familial witches.’ She called you her telepathic new best friend. Ring any bells?”

“Oh. Special Agent Margot Racer.” Margot had a strong truth-sensing ability, which I had left out of my report, though I had told Rick privately. It seemed important that my boss know when he was talking to a walking, talking lie detector. Like Tandy. “But she isn’t my friend.”

“Racer called—how many times was it, Dyson, while Ingram was out on disability?” Rick paced along in front of the window, sipping, just as Tandy had done during the long night.

“Five times,” Tandy said. “The last time was a month ago.”

I squinted up at Rick, a silhouette against the graying skyline. Margot Racer calling me was strange. Unless . . . unless she had more than a strong truth-sense. I had wondered if she was a budding, true empath. But what if she was a budding precog instead? Or something even more arcane. “Why did she call?”

“Your disability was a secret only from your family. Racer called to see if you were getting better. Why not call her back. See what she knows.”

I frowned, thinking. I wasn’t sure how to do that—call up someone and question them.

“I can do that.” But even I could hear the uncertainty in my tone.

Rick smiled, not unkindly. “Give her a call and go for coffee. Offer to share what’s happening in return for any info she might dig up on the local LEO who isn’t passing along information. It’s called quid pro quo, Ingram. You don’t have to do a spa day or become BFFs or anything.”

“Okay. I can do that,” I repeated, but more certainly this time.

Faith collects orchids and animal skulls, loves thunder storms, and writes. She likes to cook soup, bake homemade bread, garden, and run Class III whitewater rivers. She edits the occasional anthology and drinks a lot of tea. Some days she’s a lady. Some days she ain’t.
For more, see www.faithhunter.net
To keep up with her, like her fan page at Facebook: https://www.facebook.com/official.faith.hunter