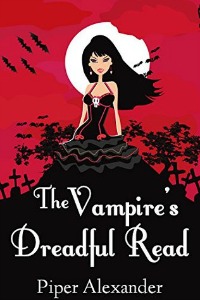 What happens in Vegas stays in Vegas, and that’s just fine with Penny Dreadful when Sin City becomes too hot for her and her sisters because a few misguided vampire hunters think vampires are an abomination against nature. Talk about rude.

Now Penny and her sisters, Paige and Pita, along with Granny Mags, live in Transylvania, Texas, home of the oldest cemetery in the United States… and the Dreadful Inn Bed & Breakfast. Life is going pretty good for the undead foursome until the director of the city library turns up dead, with a book filled with blank pages offering the only clue.

The new sheriff is drop-dead gorgeous but he’s way out of his league when it comes to solving a supernatural murder so Penny takes it upon herself to find out who the culprit is, before the supernatural shenanigans lure the hunters to town and Penny’s new home goes up in smoke.

Along the way, she teams up with a troublesome witch with a fascination for shoestrings and learns that words can do more than hurt when a little magic is added.

Note: Vampires of Transylvania Texas is a new supernatural series filled with fun, sarcasm, adventure, and maybe just a touch of romance if Penny, Paige, and Pita play their cards right.

I am obvious very late in posting my review as it seems that the book has had a name change since it was posted to Amazon. It is now known as Ink Most Deadly: Vampires of Transylvania, Texas.

The Vampire’s Dreadful Read was a campy mystery about a new vampire family who has moved into town. They have chosen the little town to try and be anonymous. Somehow this little town that previously had no supernatural problems before, suddenly have one crop up. Of course, the town is suspicious of their newest residents.

This book was a quick, cute read. The mystery is the main focus, with only slight references to the cute sheriff. I think the family members were supposed to be quirkier and more sarcastic than I read them. My favorite character was the witch. She kept her supernatural abilities secret, but liked to pull little pranks to amuse herself. One would definitely be shoelaces. She was good for a snicker.

I think The Vampire’s Dreadful read definitely falls within the paranormal cozy mystery genre. The concept of the mystery was interesting and I liked the idea that it involved a crazy book. It will leave that thought in your head whenever you open your next book, or are looking around a good used book store.

Overall, I think the story was a cute, lighthearted read. This is worth checking out if you’re looking for a simple, fun read between heavier, darker ones.