Posted May 6, 2019 by Tanya in Paranormal Romance, Reviews / 0 Comments 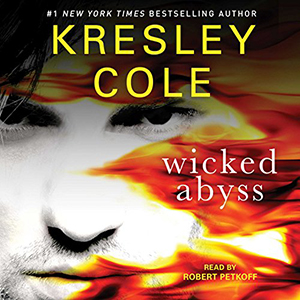 The terrifying king of hell...

As a boy, Abyssian "Sian" Infernas had his heart shattered by a treacherous fey beauty who died before he could exact vengeance. Millennia later, a curse has transformed him into a demonic monster--just as she's been reincarnated. Sian captures the delicate but bold female, forcing her back to hell.

Princess Calliope "Lila" Barbot's people have hated and feared Abyssian and his alliance of monsters for eons. When the beastly demon imprisons her in his mystical castle, vowing revenge for betrayals she can't remember, Lila makes her own vow: to bring down the wicked beast for good.

As Calliope turns hell inside out, the all-powerful Sian finds himself defenseless against his feelings for her. In turn, Lila reluctantly responds to the beast's cleverness and gruff vulnerability. But when truths from a far distant past are revealed, can their tenuous bond withstand ages of deceit, a curse, and a looming supernatural war?

Abyssian Infernas is the king of hell. He has taken on a curse with his ascension to king that has him very sensitive about his looks. He also is carrying a huge grudge from a millenia ago. He’s been waiting for the return of the woman who spurned him to return and believes he has found the reincarnated woman. However, he doesn’t realize what he is getting into when he has Calliope brought to him.

Calliope (Lila) was sent away from the fae kingdom for her parent’s attempt to kill the Fae king. She’s been living on earth working at the Magic Kingdom learning everything she can and trying to be prepared for when she will finally be allowed to return to her kingdom. Lila is great and her motto of FITFO (Figure It The F**k Out) keeps her attempting escape attempts and other ways that she can outsmart the King of Hell.

The secrets each of them hold brings a hot and cold romance. I loved Lila and her spunk. She was a lot of fun and was a great match for Sian. Sian’s concerns about what Lila would think about his curse and his alliance at times frustrated me. She was obviously attracted to him, but he let doubts and his past come between them just when their relationship seemed to be going somewhere.

I thought the characters in Wicked Abyss were a lot of fun. I was a bit disappointed in Nix’s alliance and plotting. I know she is setting up the players for the upcoming Ascension, but her alliance with the Fae was a bit irritating. She is made out to be more on the bad side than one of the good guys, and that made me feel bad. She is crazy though, so who knows. I might feel differently with whatever meddling she does next!

I really enjoyed Wicked Abyss. I can’t wait to see more of the past characters though. I’m hoping in Munro we will see more of the Valkries, wolves and vampires. The players must be close to being setup for the Ascension. It will be interesting to see what is going to happen since we’ve had so much build up to it!