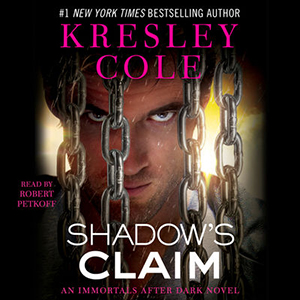 #1 New York Times bestseller Kresley Cole introduces The Dacians: Realm of Blood and Mist, a new paranormal series following the royal bloodline of Dacia, a vampire kingdom hidden within the Lore of the Immortals After Dark. Shadow’s Claim features Prince Trehan, a ruthless master assassin who will do anything to possess Bettina, his beautiful sorceress mate, even compete for her hand in a blood-sport tournament— to the death.

Trehan Daciano, known as the Prince of Shadows, has spent his life serving his people—striking in the night, quietly executing any threat to their realm. The coldly disciplined swordsman has never desired anything for himself - until he beholds Bettina, the sheltered ward of two of the Lore’s most fearsome villains.

SHE’S BOUND TO ANOTHER...

Desperate to earn her guardians’ approval after a life-shattering mistake, young Bettina has no choice but to marry whichever suitor prevails—even though she’s lost her heart to another. Yet one lethal competitor, a mysterious cloaked swordsman, invades her dreams, tempting her with forbidden pleasure.

A BATTLE FOR HER BODY AND SOUL

Even if Trehan can survive the punishing contests to claim her as his wife, the true battle for Bettina’s heart is yet to come. And unleashing a millennium’s worth of savage need will either frighten his Bride away - or stoke Bettina’s own desires to a fever pitch....

I had been putting off starting these books about the Dacians. I was scared they would veer off too far from the Immortals After Dark. They do say that they are part of the series though, so I’m not sure why I let them slip by. In my quest to catch up, I’ve included them in my IAD run. I’ve also decided to read them in audio. It is not normal for me to switch media in the middle of a series. Especially to a male narrator. I haven’t listened to many books with male narrators so I don’t have as long of a list of favorites. I’ve been assured though, that Robert Petkoff is amazing, so on went the audiobook!

I felt Bettina’s youth while listening to Shadow’s Claim. Her determination that someone else was destined to be hers didn’t ring as a mature relationship. Especially with how that male reacts to being with her. I would have been so embarrassed that I would have dropped it. But Bettina is persistent. I did get annoyed with her. I just wanted her to move on already!

Trehan was just the male Bettina needed. He was experienced and strong enough to protect her. His jealousy did get old, but after everything he was doing and gave up for Bettina, the jealousy was understandable.

Shadow’s Claim had my emotions in a riot. The drama of the competition held my attention. I was nervous to see which male would prevail or if Bettina would end up marrying a beast! The world of the Dacians was well built as well as Bettina’s realm. It is definitely branching out from our regular IAD locations!

I really enjoyed Shadow’s Claim and am excited to see more of the Realm of the Blood & Mist with Lothaire as king! That should make it a real interesting place to be!