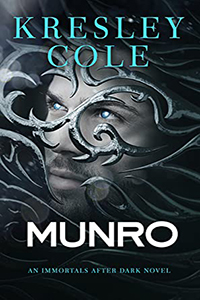 Coming off torture at the hands of his warlock captors, Munro MacRieve never expected to find his mate, or to lose her just as abruptly. Driven to desperation, the ruthless warrior uses his enemies’ own powers to reunite with her—in the distant past.

STOLEN FROM HER TIME

When a crazed werewolf crashes her wedding, Kereny “Ren” Codrina does what any cunning huntress would do: she captures him. Yet she finds herself softening toward the wounded beast—until he turns the tables and forces her into an incomprehensible future.

CAN A HUMAN AND AN IMMORTAL UNITE IN ORDER TO SURVIVE?

As danger mounts, Munro will do anything to make her undying, even sell his soul to an evil sorceress. But first he must convince his fiery mate that she belongs with him. If seduction means her survival, Munro will use every weapon in his arsenal to possess her—forever. 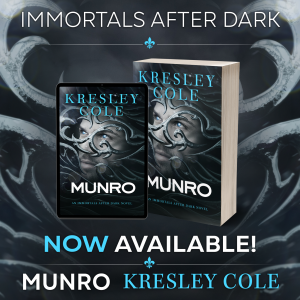 I have been a huge fan of the Immortal After Dark series by Kresley Cole for a long time. In fact, these books convinced me I wanted to be a Valkyrie! Munro took some time getting here, but now that it is, I couldn’t be happier. I reread Shadow’s Claim & Macrieve so I would be as caught up as I could be without doing a full reread of the series. After everything that Munro has been through, this was definitely his time.

Munro’s first run in with Kereny had me SO worried about how hard it was going to make the romance be for the book. Of course it will be a struggle, but that scene just had me really worried. Then everything changed and Munro’s story really took off.

Kereny is the kind of character I’ve come to love in this series. She’s tough, skilled in the fighting department and mouthy. Kereny has her beliefs and is not going to change them for some monster who thinks they are mates. However, gradually her views are changed, but she is still determined to be the one to make the decisions about her life. That keeps Munro on his toes and convinced to find out what he has to do to keep her.

I loved that Lothaire made an appearance and it was even more amazing that he had good advice for Munro. Lothaire makes me laugh with his craziness. Sometimes though, he can be lucid enough to make sense and what he told Munro made total sense. However, Munro’s ideas on how to follow that advice really had me holding my breath when they finally have the chance to make their wishes come true.

The desperation Munro felt at trying to win his mate really tugged at my heart. He deserved to be happy and he had this idea in his head of what he needed to do, but what he thought he needed to do just pushed Kereny away which frustrated him more. The frustration made it harder for him to control his beast.

Once the decision between Kereny and Munro has been taken out of their hands, I thought, there, things are going uphill to the ending. Surprise! Not so. The couple continue to run into issue after issue that affect the relationship and prevent them from just getting that HEA they deserve. It was such an emotional roller coaster. So many times I was gripping the kindle like something would happen if I stopped reading for even a second!

Kereny and Munro’s story goes above and beyond a normal HEA. I am so glad Kresley Cole is back and that she gave us this thoroughly heart-wrenching and exciting return to the Immortals After Dark series.

I can’t forget, the Epilogue and the sneak peak at Nix and Lothaire just make me crave the next book even more. This Accession is going to rock everyone’s world!