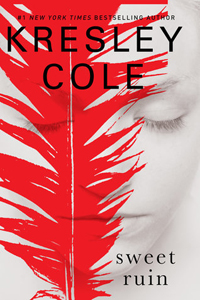 Growing up, orphaned Josephine didn’t know who or what she was—just that she was “bad,” an outcast with strange powers. Her baby brother Thaddeus was as perfect as she was flawed; protecting him became her entire life. The day he was taken away began Jo’s transition from angry girl…to would-be superhero…to enchanting, ruthless villain.

A threat to the Møriør has brought archer Rune the Baneblood to the mortal realm to slay the oldest living Valkyrie. Whether by bow or in bed, he never fails to eliminate his target. Yet before he can strike, he encounters a vampiric creature whose beauty conceals a black heart. With one bite, she pierces him with aching pleasure, taking his forbidden blood—and jeopardizing the secrets of his brethren.

A boundless passion that will lead to sweet ruin…

Could this exquisite female be a spy sent by the very Valkyrie he hunts? Rune knows he must not trust Josephine, yet he’s unable to turn her away. Despite his millennia of sexual conquests, he can’t ignore the unfamiliar longing she arouses deep within him. When Jo betrays the identity of the one man she will die to protect, she and Rune become locked in a treacherous battle of wills that pits ultimate loyalty against unbridled lust.

The Accession is moving along, getting closer and closer. We now have the Morior making their way to earth to take part. The members are believed to be the primordials of their races and therefore stronger. Rune has been challenged by the other Morior to find and kill the primordial Valkrie, Nix. While all the other Morior are sleeping, Rune continues to make trips to earth and obtain information from the nymphs. The nymphs’ are more than happy to provide Rune with information in return for the hot sex he provides him. Rune’s method of gathering information is not new to him, so he is the obvious choice for this position.

Jo has no memory of where she came from or who her family could be. She just knows she is supposed to guard her baby brother with her life. Jo hasn’t had the greatest of lives. A huge obstacle that happens to her, breaks her contact with her beloved brother. She continues to watch from afar, though, so she knows he’s doing fine.

Then Jo learns about the Lore and all the other creatures out there that could help her explain who she is and why she can do the things she does. Unfortunately all this starts happening at the same time that Nix has focused on her. Jo & Rune have made a pact that both of them should be there when one of them takes that killing shot to Nix.

The duo end up in one of Nix’s crazy puzzles and as they work together, their bond deepens. Jo is able to satisfy Rune in a way that no other has been able to in the millenia he’s been alive. The two definitely fall for each other, but Rune’s method of obtaining information is not going to go over well with Jo. She has standards, which I really loved. I can kind of see where Rune is coming from after all he has endured growing up. BUT his determination that that is the only way he can do a job. I call bullshit. Just like Josey. I was totally rooting for her.

Nix has always been a bit on the strange side. As far as anyone can tell her Foreseer ability is driving me her mad. In Sweet Ruin, she does play games, but there is more of a conscious planning to her interaction with Jo & Rune. Also her abducting Thad. When we find the root of Jo & Thad’s abilities, it is pretty clear why everyone wants them on their side for the Accession.

Jo & Rune’s relationship was so sweet. Neither of them had experience a relationship with that much emotion. Rune’s baneblood was also a big issue. How they overcome it, to me, was big flashing sign screaming “SHE IS YOUR MATE”. I think Rune had convinced himself that he would never have a mate like the others and his life would continue to be what it was.

I will admit, there are things that Thad mentions that bring to light that he has been in previous books. That frustrated me to the point where I almost picked up the series to read it all over again. After a search though, I found out what book he’s in so I only need to go back that far.

As usual, the characters are written with the same sarcastic wit that I completely enjoy with all of her characters. Sweet Ruin is a really fun read and I loved every minute of it! You can literally fall into a book like this one and not put it down again until your finished. Now I will be pining for the next one. The big war is so close we can taste it, so I’m excited about how this war is going to happen and who will survive!