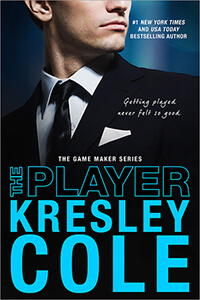 A madman with a shadowed past . . .
In the City of Sin, Dmitri Sevastyan finds her, Victoria Valentine--sexy, vulnerable, and in need of a protector. Obsession takes root deep inside him. Despite a history tainted with violation and betrayal, he will stop at nothing to possess her.

A grifter with nothing to lose . . .
Descended from a long line of con artists, twenty-three-year-old Victoria, a.k.a Vice, needs the score of a lifetime to keep her loved ones safe. She sets her sights on gorgeous and rich Dmitri Sevastyan. Even as the irresistible Russian toys with her body and mind, he tempts her heart.

Love is the ultimate wildcard.
When Vice and her associates maneuver Dmitri into a hasty Vegas wedding, he refuses to protect himself with a prenup, trusting her with all that he has. But can she trust him? As secrets unfold, the newlyweds share days of doubts and nights of the wickedest pleasures. Yet once Vice discovers her husband's past, will she stay to fight for her marriage or cut her losses and run?

For me, The Master and The Player were my absolute favorites and I can’t decide which is on top. All of the Sevastyan brothers have suffered horribly and that suffering has molded into these different characters with distinct quirks.

Dmitri felt like the most vulnerable of the brothers. He is withdrawn and angry. He just won me over, I think right from The Master, I knew I was going to love Dmitri. When he finally spots what he wants, like his brothers, he will do anything to get it. The thing that scared me is he went way over the top for Vice. He played right into her hands and that really pushed my feelings of his vulnerability along. I hurt for him pretty much throughout the whole book because you know he is putting it all out there, doing everything he can to make Vice love him, while she’s plotting his downfall with her family.

Needless to say, I wasn’t the biggest Vice fan. Her family is pretty sophisticated in their scams. They think they have it totally made when Dmitri decides he wants the one family member that has always had trouble reeling in the prey. I wanted to cry when Dmitri did not make her sign a prenup. He was just leaving himself wide open and it drove me crazy. For some reason I wanted to protect him any way that I could. I was glad when Dmitri got Vice away from the family and sequestered in their own home.

I have a big soft spot for Dmitri, and although I felt at first like he was the vulnerable one of the brothers, I couldn’t have been more wrong. But I was elated that I was wrong. He is perfect. *sigh*

I loved how The Player played out and the ending was awesome. I was left satisfied and happy for the Sevastyan brothers. This trilogy was so much more than I expected going in and I can’t recommend it enough. Kresley Cole is an amazing, talented writer and The Game Maker series proves she can conquer contemporary and erotica just as perfectly as she can paranormal romance.

The narration was truly well done. Kimberly Alexis did an amazing job. I found her Russian accents believable and didn’t distract me at all. Each character, from each of the books in the trilogies was unique and so well done. When they all come together in the final book, the voices were consistent from when Kimberly narrated that couple’s book. I truly enjoyed the narration of the Game Maker series.