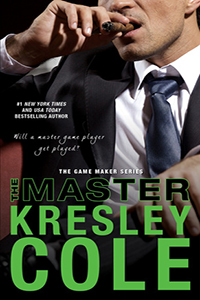 Everyone fears the Master...

Catarina Marín was a well-off young wife until her world fell apart. Now she’s hiding out, forced to start working as an escort in Miami. Her very first client is beyond gorgeous, but when he tells her what he plans to do to her, Cat almost walks out of the door.

If pleasure is a game, play to win.

After their mind-blowing encounter burns out of control, the lovers crave more. If they escape the deadly threats surrounding them, can Maksim overcome his past—to offer Cat his future? Only then will she tempt him with what he really wants: her, all tied up with a bow.

There’s been a long space between when I read The Professional and reading this. I don’t know if that time span had anything to do with it, but I loved this book SO much more than the previous one!

I loved Cat. She is in hiding and doing what she can to survive. Moving periodically, taking less than stellar jobs. But she is committed to her education. When she has to take the place of a coworker against her better judgement, her whole life does a 180. Cat has spunk and fire and Maxim has no idea how to handle that. Her personality evens the score so that she is not the only one on unfamiliar territory. Maxim gets shocked into seeing and feeling parts of himself he had locked away for so long. Both have no idea what they are doing, or even know enough about the other to have a “normal” relationship, so they are running on what their gut tells them. Maybe a little money helps in the beginning too.

So we all know I do not come out of my PNR or UF box very often. It seems when I do it is for PNR or UF authors that are stretching out into other genres. Of course I’m going to read a Kresley Cole book, even if I’m afraid I might be uncomfortable. Cole did such an amazing job that I don’t think I even blushed. I’m not saying that The Master is not as erotic as it is should be. It definitely is. But I also found myself wrapped in the emotions of what was happening between them and I had more of a curiosity about the things they were doing. There was more on the table than just a sex fest erotica. So much more.

The Master pulled me into the story like I hadn’t been pulled in to a book for awhile. I was excited to get in the car to listen. The audio was amazing. There is so much more to The Master than what I originally expected and the excitement and intrigue of the Russian mob world, along with the relationship building of Cat and Maxim and the danger Cat was trying to avoid were all music to my ears. I couldn’t get enough.

If you are in the least bit resistant in trying something dubbed as “erotica”, I highly recommend you try this trilogy. There was definitely some new stuff in it for me. (I did pay attention LOL) but the story itself was just so stinking romantic and fascinating! I can’t recommend The Master enough.