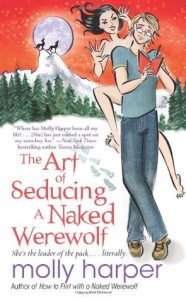 Baring It All Generations of werewolves have been secretly residing in a secluded valley a stone's throw from Grundy, Alaska. So when a snooping Outsider comes to Grundy to investigate rumors of lycanthropic shenanigans in the area, the valley's pack alpha, Maggie Graham, resolves to chase him away, even if doing so takes a quick bite on the butt. What a pity that researcher Nick Thatcher turns out to be so drool-worthy, and that his kisses make Maggie want to sit up and beg. Maggie just can't seem to convince Nick to leave . . . and even worse, she can't convince "herself "to stay away from "him. "Cross-species dating is problem enough for a harried alpha female, but on top of that, a rival group of werewolves is trying to move into the valley. With interpack war threatening, Maggie can't afford to be distracted. Combining romance and a career can be tough for anyone; for a werewolf in love with a human, it may be disastrous. . . .

Maggie Graham is now the clan’s alpha and is doing her best to show she is worthy of the position. She is working her butt off for the people of the valley while trying to avoid all the matchmaking the citizens and other clans are pushing on her in an attempt to get a man into the alpha position. When Nick Thatcher comes sniffing around trying to prove his werewolf theories, dealing with him could be a deed that would push Maggie further up the respect pole. Problem is, he may just might have the upper hand with her. With her emotions running wild, and the attacks on the valley, Maggie will struggle to keep herself worthy of her station.

Maggie has been brought up with werewolf brothers, and even though the people of the valley think they need a male to run the pack, I don’t think they could have chosen a better, tougher leader. She is truly loyal and keeps her people and their interests at the forefront, at least until Nick comes along and starts playing with her senses. The struggle between Nick and Maggie is amusing. She tries so hard NOT to like him and he tries so hard to convince her he’s there for her and can really help her out. Even with Maggie trying to do the right thing by dating a pack member. They just can’t stay away from each other. Maggie’s protective nature comes out strong for this human, and her reactions to some of Nick’s antics had me laughing out loud.

I am truly enjoying this series and The Art of Seducing a Naked Werewolf had some pretty big ups and downs, while keeping the humor I enjoyed from the first book. I will definitely be continuing this series as well as other Molly Harper books.