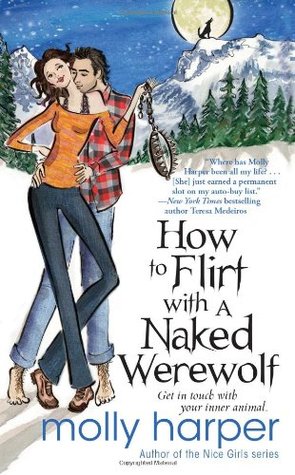 Even in Grundy, Alaska, its unusual to find a naked guy with a bear trap clamped to his ankle on your porch. But when said guy turns into a wolf, recent southern transplant Mo Wenstein has no difficulty identifying the problem. Her surly neighbor Cooper Graham,who has been openly critical of Mo's ability to adapt to life in Alaska, has trouble of his own. Werewolf trouble.

For Cooper, an Alpha in self-imposed exile from his dysfunctional pack, its love at first sniff when it comes to Mo. But Cooper has an even more pressing concern on his mind. Several people around Grundy have been the victims of wolf attacks, and since Cooper has no memory of what he gets up to while in werewolf form, hes worried that he might be the violent canine in question.

If a wolf cries wolf, it makes sense to listen, yet Mo is convinced that Cooper is not the culprit. Except if hes not responsible, then who is? And when a werewolf falls head over haunches in love with you, what are you supposed to do anyway? The rules of dating just got a whole lot more complicated.

Mo shows her independent and adventurous spirit when she picks up and moves thousands of miles away from her family and old life to start anew in the great wilds of Alaska.  Her personality helps her fit right in with the great characters of Grundy, despite their wariness of strangers.  Not many people stay past their first winter.  Mo is definitely tougher than that, which is a good thing when she runs into Cooper.  The grumpiest and most distrusting citizen of Grundy.

Cooper has a lot to hide, and he uses his attitude as part of his shield.  However, his wolf has a calling Cooper is trying hard to resist.  He can’t endanger his secret and family, but Mo just keeps finding herself in situations his protective nature drives him to save her from.  But when attacks start happening in and around the town, Cooper is concerned that his wolf might just be acting on it’s own.

How To Flirt With A Werewolf was a delight to read.  The storyline progressed over months so the romance encountered more than one bump.  The actual attacks were also spread out so I thought it was harder to pin down on whether this was one serial attacker, or completely different situations for different reasons.  Mo had such a likeable personality, and her dialogue, both inner and outer, was so snarky and sarcastic that she had me laughing all the time.  I don’t know if she was brave or stupid, but she takes on the werewolves like she was built like a bulldozer instead of the tiny thing she is.  Her interactions with Maggie were just outrageous.  No one pushes Mo around.  Not even a bitchy, mean werewolf like Maggie.

The narration for this book was very well done, and I loved her accent for Evie.  Amanda Ronconi pulled off the sarcasm and snark beautifully and made How To Flirt With A Werewolf a great listen.