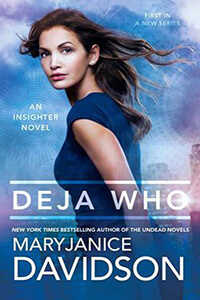 Leah Nazir is an Insighter. Reincarnation is her business. But while her clients' pasts are a mess, Leah's is nothing short of tragedy. She's been murdered. A lot. If left to that bitch, destiny, it'll happen again. Leah wants to know who's been following her through time, and who's been stalking her in the present...

P.I. Archer Drake has been hired by Leah's mother to keep an eye on her. But the more time he spends watching, the more he finds himself infatuated. Before long, he even finds himself agreeing to help find the person who wants her dead. Over and over again.

Now going full-on "rewind," Leah hopes it can stave off the inevitable. After all, she's grown fond of this life - and even fonder of nerdy Archer. But changing her pattern means finding out who her killer is today. And as Leah fears, that could be anyone she has come to know and trust. Anyone.

This is my first book written by MaryJanice Davidson that I have read. In saying this, the problems I found that bothered me, may be the writing formula that this author uses.

Deja Who is focused on reincarnation. It is what a lot of people blame their faults and issues from. Leah is counselor for these people seeking knowledge of their past lives, with suggestions on how they can focus on their current lives and try to break the cycles they have been in throughout all of their many lives. When Leah is not working, she is preparing for the death she endures during every one of her lives. She is quite focused on being prepared and possibly changing the circle. In her hyper aware state she ends up meeting Archer who Leah thinks is the one out to kill her.

Archer has been hired to follow and keep an eye on Leah. His attraction for her soon overrides his instructions to lay low and he approaches her. What he doesn’t realize is that she has known he was there all along and was ready for his confrontation. Archer’s character was a bit strange for me. I’m not really sure what his intentions were with Leah. He wanted her but he was taking some kind of long, roundabout way of them being together. He plans on being together forever with her, but he restricts their interactions. I guess maybe I’m used to couples who once they decide they are interested in each other just progressing into sexual relationships. Archer comes across as kind of immature to me. Sort of naive.

A really interesting character is Leah’s mom. She doesn’t really seem to be in reality and has pushed Leah beyond reason. Her actions and ideas are just so over the top in her quest to return to Hollywood. She seemed to be an irritant to Leah, but she was plain creepy to me! I did enjoy the homeless woman in the park, Cat. Her choice of lifestyle was different, but it worked for her. Smart as a whip though and was definitely the voice of reason throughout.

Archer and Leah work together putting together the clues of who could be Leah’s next killer. At least until Leah realizes she could be putting Archer and Cat in dangerous situations and tries to put distance between them all. The situation here left me conflicted. Was I pissed at Leah for her actions and words or just totally done with Archer’s actions. I knew what she was doing, but wow, when her clients and coworkers called her a bitch, they certainly knew her well.

The killer was somewhat predictable. The world building was definitely interesting and does leave room for building. I would be interested to see what characters would be used and how a new story could evolve. My biggest complaint was the character’s narration. That they would be thinking something and then interrupt their own thoughts with other thoughts, then jump back to the initial thought. I found that made reading really difficult for me. As I said, this is my first MaryJanice Davidson book, so I’m not sure if this is the way she writes in her other books.

I did come away with a few favorite scenes that were kind of off the wall but funny at the same time. I think if you are a fan of MaryJanice’s books and are used to the way the narration is written, this would definitely be something to jump into. There is definitely some good humor and adventure here. I will be interested to see the characters and plot for book two. 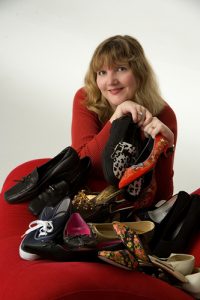 MaryJanice Davidson is a former model and medical test subject, as well as a New York Times best-selling author who has no idea why she is a success at what she does. (“No idea. At all.”) Her books have been translated into several languages and are available in 15 countries (“No one is more surprised than I.”). She frequently speaks to book clubs (“I don’t know why my books sell.”), writer’s groups (“I don’t know why I’m on best-seller lists.”), and World War Two veterans (“Thanks for driving Hitler to suicide!”). She lives with husband, family, and dogs in St. Paul, MN, and loves (“No, really…I do!”) hearing from readers.