March was a pretty chaotic month. There was lots going on and I had a hard time keeping everything rolling. Thanks everyone for sticking with me during this erratic posting month. I’m doing a reread (listen) to a couple of series I listened to last year and hoping I can get my head around them all. I’m still listening faster than I can write, but at least this time I’m taking notes! I’m not usually a rereader, but I’m finding I’m enjoying it. Most likely because I honestly don’t know how to pick off my TBR what I’m going to listen to next. It’s been a long time since I’ve read Immortals After Dark by Kresley Cole, and Robert Petkoff is the narrator on the audios, so I’m thinking of giving those a listen. It will take a big junk of credits, but I think it will be fun. I just don’t know what new books I want to listen to, so this will give me some time.

I have to say “damn virtual signings”. Because that is what happened to my book budget again this month! It is an obsession. This month it was a signed hard cover of Ruthless by Gena Showalter. I also needed to finish my paperback collection of the Phoenix pack series books by Suzanne Wright. Now I just need to finish the Mercury pack collection and I will be happy. So yeah, book budget took another hit. Below are the numbers.

This month was kind of a mish mash. I finished collecting the paperbacks of the Phoenix pack series, then also grabbed a couple of ebooks that I had gotten the paper copies for, but needed the ebooks. The Yasmine Galenorn books were actually freebies at Amazon. I found out from her newsletter, so make sure to check prices before grabbing them. They are all the first book in their respective series, so a great way to try something new.

I have high hopes that April will bring a much more productive and calm month. How was your March? Did you get stuck with snow? Can you think of any good audiobooks to recommend? I’ve been listening long enough I’m starting to get picky about narrators. Shoot me some recs in the comments! Have a great April! 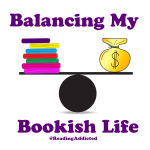