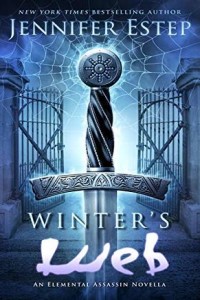 An assassin at a renaissance faire. What could possibly go wrong? Everything, if you’re the Spider . . .

I might be Gin Blanco, aka the assassin the Spider, but even I need a break from the bad guys every now and then. So when Owen Grayson, my significant other, suggests a trip to the Winter’s Web Renaissance Faire, it sounds like a perfect distraction from all my problems.

The faire starts off innocently enough, but something seems slightly off about the cheery atmosphere and costumed characters. Maybe I’m being paranoid, but I can’t help but feel like I’m trapped in someone else’s icy web—and that they don’t want me to leave the faire alive . . .

Note: Winter’s Web is a 27,000-word novella that takes place after the events of Venom in the Veins, book 17 in the Elemental Assassin urban fantasy series. Winter’s Web first appeared in the Seasons of Sorcery anthology in 2018.

Winter’s Web was previously released in an anthology, but I do not read anthologies, mainly because they normally contain stories from other series I haven’t started yet. Luckily, Jennifer Estep is releasing this novella on it’s own on March 12, 2019. This always makes me happy because I hate missing the novellas in my favorite series. I’m excited to see what kind of trouble the Spider encounters at a Renaissance Faire!