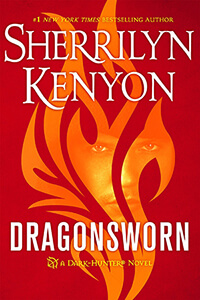 There is nothing in the universe the cursed dragon, Falcyn, hates more than humanity . . . and in particular, Greek humans. In a war he wanted no part of, they systematically destroyed everything he’d ever cared for. Now he lies in seclusion, away from the world and waits for the day when evolution will finally rid him of the human vermin.

Medea was born the granddaughter of the Greek god Apollo, and among the first of his people that he cursed to die. But she will not let anyone rule her life. Not even her notorious grandfather. And when Apollo sends a new plague to destroy what remains of her people, she refuses to standby and watch him take everything she loves from her again.

This time, she knows of a secret weapon that can stop the ancient god and his army of demons. Once and for all. However, said device is in the hands of a dragon who wants nothing to do with politics, the gods, humanity, demons or Greek Apollites. And especially not her. He is the immovable object.

When Apollo makes a strategic move that backfires, he forces Falcyn back into play. Now Medea either has the weapon she needs to save her people, or she’s unleashed total Armageddon. If she can’t find some way to control the dragon before it’s too late, Falcyn will be an even worse plague on the world than the one Apollo has set loose. But how can anyone control a demonic dragon whose sole birthright is total destruction?

Dragonsworn is being numbered at #28 in the Dark Hunter series, but it is also kind of a trilogy within the series called Dragons Rising Trilogy and it is #3 in the trilogy. This trilogy has been following along with three dragon brothers. Falcyn is cursed and is known as the fiercest of the brothers. He hides away, keeping to himself and away from the despised humans who ruined his life. He came out of hiding to help his brothers, and I’m thinking that is where his story is going to begin. The first two books, Dragonbane and Dragonmark both happened along one timeline so they kind of came together all at the end. A lot of people complained that there was a huge chunk of Dragonmark that was just a copy/paste of what was in Dragonbane. I hope we don’t find that in Dragonsworn.

I am a big Sherrilyn Kenyon fan and anything that comes from the Dark Hunter universe is a must read for me. If the amount of books in the series intimidates you, you can always jump in with Dragonbane and just do the trilogy. I don’t think you will miss much.

Dragonsworn releases August 1, 2017. That gives you lots of time to at least get up to speed on the dragons. Also, if you check out the B&N link, you can purchase a signed hardcover of the book. You all know me and my addiction to signed books. I will likely buy the ebook AND the signed copy. I don’t think I’m going to be at any events that Sherrilyn might be attending to get a signature in real life, so I guess buying one from B&N will be my next move. I’m not a big fan of the cover of this book. I’m kind of hoping it is just a placeholder until a better one is created. What do you think?