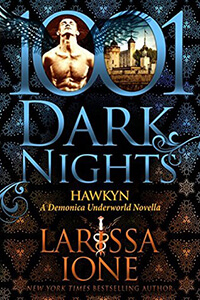 As a special class of earthbound guardian angel called Memitim, Hawkyn is charged with protecting those whose lives are woven into the fabric of the future. His success is legendary, so when he’s given a serial killer to watch over, he sees no reason for that to change. But Hawkyn’s own future is jeopardized after he breaks the rules and rescues a beautiful woman from the killer’s clutches, setting off an explosive, demonic game of cat and mouse that pits brother against brother and that won’t end until someone dies.

Aurora Mercer is the half-wytch lone survivor of a psychopath who gets off on the sadistic torture of his victims. A psychopath whose obsessive psyche won’t let him move on until he kills her. Now she’s marked for death, her fate tied to that of a murderer…and to a sexy angel who makes her blood burn with desire…

**Every 1001 Dark Nights novella is a standalone story. For new readers, it’s an introduction to an author’s world. And for fans, it’s a bonus book in the author’s series.**

I cannot stay away from the Demonica world! I miss all the characters from the series and love getting pulled back in. I know these are all new characters, but I love this world and Larissa Ione’s writing so I’m sure this is going to be a good read. They have managed to get their way on my auto-buy list. Hawkyn releases February 27, 2018 as part of the 1001 Dark Nights books. This will give you a taste of the Demonica world and if you haven’t read them yet, make you want to go read the series!

Waiting On Wednesday ~ The Jackal by J.R. Ward