Posted December 7, 2016 by Tanya in Waiting on Wednesday / 0 Comments 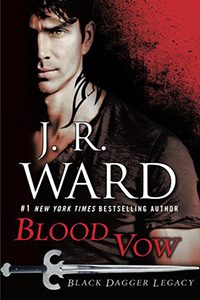 #1 New York Times bestselling author J. R. Ward returns as her thrilling, original spin-off series set in the world of the Black Dagger Brotherhood continues! When a brooding vampire warrior-in-training teams up with a quick-witted aristocrat to solve a deadly mystery, the only thing more dangerous than their mission is their undeniable attraction.

Please excuse my lateness on this. This year has flown by so fast I didn’t release this was releasing so soon!

I’ve got to be honest. I’m not normally a YA or NA reader, so going into Blood Kiss, I was a little skeptical. I was so pleased with how Blood Kiss was done, that I’m so excited about Blood Vow releasing. The characters do give off the feel of being really young. Where they are all in the training camp the Brothers put together, I thought it was going to be like the books you read with characters in high school or college. Boy was I wrong. The characters are definitely older that what I envisioned, and their romantic scenes feel adult. I’m already getting attached to this class of trainees. Their personalities are all a mystery.

I will admit, I am truly delighted that we get SO much of the Brothers in these books. That is another aspect of Blood Vow that has my excitement for this book overwhelming. The Brother we will be reading about is Rhage and he is so one of my favorite brothers!

It would have missed so much if I had of passed this series by because I anticipated a YA or NA book. This definitely reads adult. This does point out to me that I could be missing a lot by not being open to those other genres.

So, you cannot miss this installment of The Black Dagger Legacy. Especially if you are a Rhage fan. Blood Vow releases on December 6, 2017. I am SO sorry I didn’t get this out early enough as now the Virtual Signing has closed, and I know a lot of you like to treat yourself to those beautifully packaged VS editions. Don’t let that deter you though! Barnes and Noble are selling some signed copies! You can also get your hands on Blood Vow at one of your preferred retailers.