Posted September 4, 2019 by Tanya in Waiting on Wednesday / 0 Comments 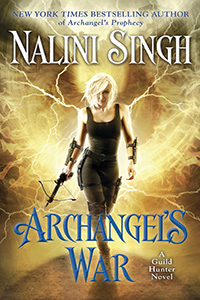 The world is in chaos as the power surge of the Cascade rises to a devastating crescendo. In furiously resisting its attempts to turn Elena into a vessel for Raphael’s power, Elena and her archangel are irrevocably changed. . .far beyond the prophecy of a cursed Ancient.

At the same time, violent and eerie events around the world threaten to wipe out entire populations. And in the Archangel Lijuan’s former territory, an unnatural fog weaves through the land, leaving only a bone-chilling silence in its wake. Soon it becomes clear that even the archangels are not immune to this deadly evil. This time, even the combined power of the Cadre may not be enough. . .

This war could end them all.

After Archangel’s Prophecy, I am dying for Archangel’s War. The anticipation is killing me! This promises to be an exciting adventure into the Guild Hunter world. I just can’t imagine what is going to be revealed about Elena and Raphael. Archangel’s War releases 9/24/19. I’m debating actually reading the ebook because I don’t know if I can wait for the audio. I have the eArc but have been kind of waiting to see when the audio will be offered. I don’t know if I can wait.

The Guild Hunter series by Nalini Singh is a great UF/PNR that I absolutely recommend. There are amazing characters with lots of adventure and excitement. Don’t miss this newest release!