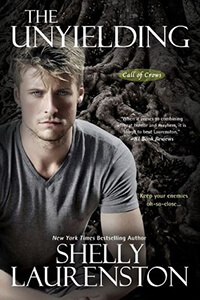 Stieg Engstrom, Angriest Viking Ever, has got big problems. The human Viking Clans of earth are in danger of being obliterated—along with the rest of the world—and the only one who may be able to save them is a super pain-in-the-ass Crow. Most people annoy Stieg, but this is the one woman he really can’t stand…

This is the first series I have read from Shelly Laurenston. I’ve been meaning to read the Pride series, and even have the first few books to start, but Call of Crows just started and I thought I would start with this one instead. I can’t tell you how much I love the writing in this series. It reminds me of another author, but at the same time there are a lot of differences. We have a lot of mythology in this series so I’m getting a refresher in the mythology I learned in high school.

The two main groups in the series, the Crows and the Ravens do come together a lot and the first two books find us with couples originating from both groups. It looks like that will be the case again and I’m SO excited. The characters have so much spunk and attitude that you can’t help but love them. At times even a bit immature, but they are Crows, they are allowed to celebrate!

So, instead of just doing my WOW, I began on a series review. Let’s just say I am beyond excited for The Unyielding by Shelly Laurenston to release next week, March 28, 2017. If you haven’t tried The Call of Crows series yet, get on it quick. You are going to love it and have some serious laughs in the midst of some exciting action. I want to be a Crow and you will too after you get to know them! Oh, but I do have to mention the guy on the cover. Does he not look amazingly like the guy on the cover of Wild Things, the book I’m listening to now? (Check out my Currently Reading in the sidebar)