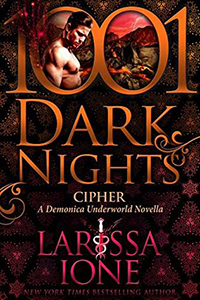 It’s been seven months since Cipher, an Unfallen angel who straddled a razor thin line between good and evil, woke up in hell with a new set of wings, a wicked pair of fangs, and a handler who’s as beautiful as she is dangerous. As a laid-back cyber-specialist who once assisted guardian angels, he’d been in a prime position to earn back his halo. But now, as a True Fallen forced to use his talents for malevolence, he must fight not only his captors and his sexy handler, but the growing corruption inside him…before the friends searching for him become his enemies and he becomes his own worst nightmare.

Lyre is a fallen angel with a heart full of hate. When she’s assigned to ensure that Cipher carries out their boss’s orders, she sees an opportunity to take revenge on those who wronged her. All she has to do is appeal to Cipher’s burgeoning dark side. But the devastatingly handsome fellow True Fallen has other ideas — sexy ideas that threaten to derail all Lyre’s plans and put them in the path of an approaching hell storm.

Danger and desire explode, even as Cipher and Lyre unravel a sinister plot that will fracture the underworld and send shockwaves into Heaven itself…

You know, it feels like forever since I’ve been in this world. In these 1001 Dark Nights stories from the Demonica universe we have been working ourselves away from the characters we have met before and are encountering new ones. I’m excited to learn about this couple and I’m really hoping we’ll get to see some of our favorites from the earlier books. I really do miss them. It is great that Larissa Ione has continued to bring us this world even though the regular novels have ended.

Cipher releases April 9, 2019 and right now the preorder link is only up at Amazon. I’m sure once it’s been released you’ll be able to get it at the other ebook retailers. This is a novella I’m dying to dig into, so the release date can’t come soon enough!