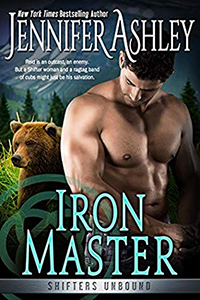 Stuart Reid is an Iron Master—a Dark Fae with a rare ability to make iron do his bidding. Exiled by the High Fae who fear him, he now lives in a simple house in Shiftertown outside Las Vegas, watching over Peigi, a bear Shifter woman, and the cubs she cares for.

Peigi, rescued from an evil Shifter and welcomed into the Vegas Shiftertown, knows Reid and the cubs have helped her survive and heal.

She also knows Reid is alone and lonely, a strong man coping with his exile. The bond she feels pulling her to him scares the crud out of her—she’s been down this road before.

When Reid’s people send him a desperate call for help, Peigi senses danger to him—too much of it. She finds she’ll do anything, even sacrifice herself and her happiness, to keep him safe.

I feel like I’ve been waiting forever for the next Shifters Unbound book. If this one wasn’t coming out so soon, I may have to do a reread to fresh my knowledge of the characters. Hopefully, there will be enough refresher in Iron Master that I won’t be totally lost.

Shifters Unbound releases February 11, 2020. I have heard that the audiobook won’t be far behind, which is what I’ll be waiting for. Cris Dukehart will be narrating again so I’m anticipating a great audio.

For those of you that thought Shifters Unbound had gone away, surprise! The next is on its way!

Waiting On Wednesday ~ The Sinner by J.R. Ward

Waiting On Wednesday ~ The Jackal by J.R. Ward