Posted December 13, 2017 by Tanya in Waiting on Wednesday / 4 Comments 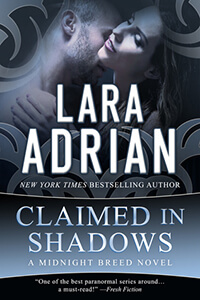 In this pulse-pounding new Midnight Breed vampire romance novel from New York Times and #1 international bestselling author Lara Adrian, passion explodes between a daywalking member of the Order and a fiery female warrior whose shadowy past will test the bonds of both duty and desire.

As the son of a formidable Breed warrior, Aric Chase has been devoted to the Order all his life. With his training completed, all he needs is one successful mission before he can join the fight to destroy the Order’s chief nemesis, Opus Nostrum. His rare ability to daywalk lands Aric an assignment in Montreal, where he learns he’s to be teamed with another new recruit, a beautiful, but tough-as-nails Breedmate named Kaya Laurent.

Independent and driven, Kaya wants nothing more than to become a full-fledged member of the Order. Having grown up in squalor and neglect on the streets of Montreal, she longs for the close-knit family she’s found during her training to be a warrior. Eager to prove herself, she is thrilled to be given the chance at a key operation—even if she must share the mission with an arrogant, far-too-seductive Breed male who’s practically Order royalty.

Their unwanted partnership soon erupts into a desire neither of them can resist. But when Kaya’s past reaches out from the shadows to call her back, she must decide between protecting a dark alliance that could shatter her dreams of joining the team and a truth that could not only forfeit Aric’s faith in her, but bring the enemy right to the Order’s door.

I have been waiting for a release date on this book forever. I’m on the mailing list but somehow I missed it. I can’t wait to read Aric’s story. I feel these books are a bit different than the first books. More on the new adult side, but I think that is because I’ve read the stories of the character’s parents and that makes it hard to imagine them as old enough to be finding their Breed-Mates. I still love this series, and getting glimpses at the original Breed members in their new lives is a big bonus.

Claimed in Shadows releases on New Year’s Eve, 12/31/17! Just sneaking in under the 2017 releases. I’m hoping this book gets released in hard cover, but I’m not sure if that is in the cards. I know when authors are self-publishing, the print books don’t get much attention. I’ll be keeping my eyes peeled though. You know how I love those Virtual Signings! Claimed in Shadows IS up for preorder, so make sure you head over to your ebook retailer and get it ordered and ready for download on 12/31/17!