Posted February 28, 2018 by Tanya in Waiting on Wednesday / 0 Comments 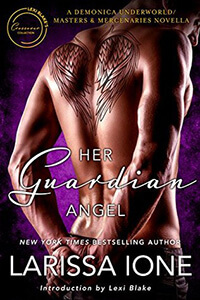 After a difficult childhood and a turbulent stint in the military, Declan Burke finally got his act together. Now he’s a battle-hardened professional bodyguard who takes his job at McKay-Taggart seriously and his playtime – and his playmates – just as seriously. One thing he never does, however, is mix business with pleasure. But when the mysterious, gorgeous Suzanne D’Angelo needs his protection from a stalker, his desire for her burns out of control, tempting him to break all the rules…even as he’s drawn into a dark, dangerous world he didn’t know existed.

Suzanne is an earthbound angel on her critical first mission: protecting Declan from an emerging supernatural threat at all costs. To keep him close, she hires him as her bodyguard. It doesn’t take long for her to realize that she’s in over her head, defenseless against this devastatingly sexy human who makes her crave his forbidden touch.

Together they’ll have to draw on every ounce of their collective training to resist each other as the enemy closes in, but soon it becomes apparent that nothing could have prepared them for the menace to their lives…or their hearts.

I love it when Larissa Ione gives us another glimpse into the Demonica World. We may have new characters, but we still get visits from some of our old favorites. This is still published by Evil Eye Concepts, but doesn’t seem to be a part of the 1001 Dark Nights. It is, however a crossover with Lexi Blake’s Masters and Mercenaries series. It says it is crossover book 2, but I don’t see which book they initially crossover. I haven’t tried that series, so I’m interested to meet the characters.

Her Guardian Angel releases April 10, 2018. A big day for releases so you’ll want to get this preordered so you don’t miss it. It will be a blast you won’t want to miss!

Waiting On Wednesday ~ The Shadows by J.R. Ward