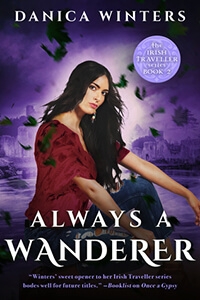 Helena O’Driscoll and Graham Kelly’s first few months together haven’t been easy. Helena, missing the traditional Traveller lifestyle she gave up for Graham, can’t help but feel that their cultural differences have doomed their relationship. And with preparations for their brand-new hospital for Supernaturals filling their days, they feel out of sync, and maybe even out of love.

When a man from the local equestrian center is murdered, Helena begins having visions of the future darker and more dangerous than ever before. With a killer in their midst, everyone at Adare Manor is at risk, and Helena and Graham must work together to catch the culprit even as their relationship unravels. And when the murderer claims another victim, this one even closer to Helena’s heart, the question becomes not whether their love will survive, but whether they will.

Always A Wanderer is the second in the Irish Travellers series by Danica Winters. I would really recommend reading the first book, Once A Gypsy first. It will explain alot about what Helena and Graham are trying to accomplish and the enemies they face.

Helena & Graham’s relationship is at a low point and they are unsure of themselves as a couple. I think most of it was Helena’s culture and how she perceived a relationship to be.

But their love life is just fleeting moments throughout the book. There is a hate group that is throwing a rally in their town and it looks like it might interfere with the grand opening of the hospital the couple have built.

Always A Wanderer held some surprises and not always good ones. There is a character that didn’t get a lot of face time, but ends up being a very big player. Helena’s powers seem to be growing and that leaves a big question for them to deal with in the future.

I was a little disappointed in Helena when it came to the relationship parts with Graham, but the rest of the story held a really good mystery. Sometimes it got confusing when they switched back and forth between calling people by their first names, then in the next sentence they are referring to them as “Mr. Poole” or whoever. Always A Wanderer was a quick read as you flew through the mysteries with Helena and Graham. It was a bit of a roller coaster of feelings, but I also felt that you didn’t know the characters well enough to be greatly impacted by them. I think a little more time doing some more little flashbacks to Once A Gypsy would have been helpful. Overall, the Always A Wanderer had enough suspense that it kept me reading past my bedtime. 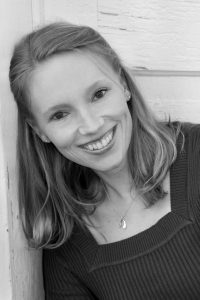 Danica Winters is an Amazon bestselling author who has won multiple awards for writing books that grip readers with their ability to drive emotion through suspense and occasionally a touch of magic. Most recently, Danica was the winner of the Paranormal Romance Guild’s Paranormal Romantic Suspense Book of the Year Award and Chanticleer Media’s Paranormal Book of the Year for her novel Montana Mustangs.
When she’s not working, she can be found in the wilds of Montana testing her patience while she tries to understand the allure of various crafts (quilting, pottery, and painting are not her thing). She always believes the cup is neither half full nor half empty, but it better be filled with wine.
Danica Winters is represented by Jill Marsal of the Marsal Lyon Literary Agency.