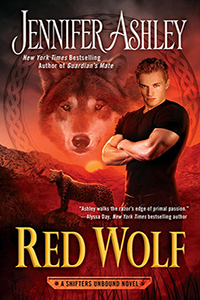 Lupine Shifter Dimitri has always had to defend himself to other Shifters. As a red wolf, he’s not considered a “pure” wolf, and the battles have honed him into a tough fighter, a champion of the fight clubs. Jaycee Bordeaux, a leopard Shifter, is Dimitri’s staunchest defender and oldest friend. Dimitri is determined to turn that friendship into a mate bond.

Jaycee loves that idea, but she knows that a mate bond can’t be forced. And when Dimitri and Jaycee are called on to go undercover to protect collared Shifters, she knows the dangers ahead will make or break their future together.

I’m so excited not only to be back in this world, but to see Dimitri and Jaycee. We saw them last in White Tiger and I loved them then. You get hints of their relationship in that book. Jaycee is feisty and when I was reading White Tiger, I wasn’t sure if I liked her or not. But by the end, she had me won over.

Red Wolf is coming up right around the corner! May 2, 2017 to be exact. I actually love to listen to this series. Cris Dukehart does an awesome job of narrating. Either way, make sure to stay caught up with everyone in Shifter’s Unbound!