Posted February 8, 2017 by Tanya in Waiting on Wednesday / 4 Comments 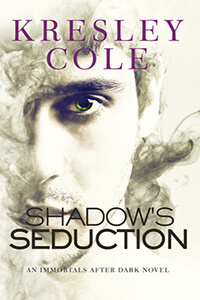 In this scorching Immortals After Dark/Dacian novel, #1 New York Times bestselling author Kresley Cole brings together a wicked vampire prince used to getting everything he desires and a demon warrior who always felt like an outcast.

A night of debauchery
Prince Mirceo Daciano and his new friend Caspion the Tracker comb the streets of Dacia, drunkenly seeking out pleasures of the flesh. In what should have been a typical night, they coax a bevy of nymphs to bed. To impress their females, the demon and the vampire kiss on a dare.

Changes them forever
Once they finally break away from their soul-searing kiss, they find themselves alone—and shaken. Had they imagined their explosive chemistry? Obstacles—ranging from a death sentence, to exile on a war-torn dimension—threaten to destroy their lives, much less the vulnerable promise in that one kiss.

How long can they resist the fire that blazes between them?
Even if Mirceo can accept Caspion as his fated mate, the sensual vampire still must convince the stubborn demon that their bond is forever. And any royal Dacian union must receive the blessing of King Lothaire, an unpredictable and savage killer…

Shadow’s Seduction is going to be more a Dacian’s book, although it is listed also as an Immortals After Dark. The blurb sounds so interesting as we are taken through such an evolution of these two men. This is different for a Kresley Cole novel and I’m really excited to see how she pulls it together. As if Kresley Cole could do anything wrong in my book!

Shadow’s Seduction has an amazing ebook price so you have just have to pick it up. Besides, I think I saw that Lothaire will be making an appearance?! Definitely worth it! You can preorder now, so make sure to grab it before the February 28, 2017 release date.

And can I just say:

Waiting On Wednesday ~ The Darkest Torment by Gena Showalter @genashowalter