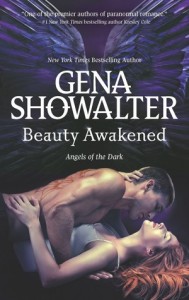 His name is Koldo. He is scarred, powerful, his control legendary-and he lives only for vengeance, determined to punish the angel who viciously removed his wings. But if he yields to the forces of hatred, he will be kicked from the heavens, eternally damned.

She is his last hope. Nicola Lane was born with a defective heart, yet this fragile human shows surprising strength as demons stalk her every move, determined to end her. She is the key to Koldo’s deliverance…and his downfall. Though he fights duty, destiny and his first addictive taste of desire, his toughest battle will be the one for Nicola’s life-even if he has to sacrifice his own….

My Review ~
I started out with Gena Showalter’s Lords of the Underworld. I loved them, couldn’t get enough of them, wiped the drool off my kindle, so I went into the Angels of the Dark series thinking they were going to be just as hot and wild. I mean they were a type of spin-off right? Wicked Nights, the first of the Angels of the Dark wasn’t too bad, I was familiar with Zacharel already, so it was ok. Plus I got to see some Lords, always a plus.

I don’t know what it is with the angels. They are just so cold that when they start to feel emotions, it seems to take a long time to deal with having them. I was not really big on the whole “this woman is my responsibility and that is all”. What? How long throughout the book are you going to tell yourself that? Koldo is a very tortured angel, as they all are in this crew. I was hoping that knowing his past would endear me to him a little more, and I melted a little, but I still wouldn’t fly my flag on Team Koldo. I’m really mad right now because I can’t remember the name of Koldo’s partner, Axel or something like that? Anywho, I really liked him. He had attitude and sarcasm and I really liked that. I also enjoyed the appearance of William and our little nugget of information on him. Those two things will drive me to get the next book.

Now, I’ve noticed I’ve spent all this time talking about the hot guys. I haven’t mentioned the female characters at all. Maybe that was because they really didn’t make a big impact for me. Nicola was ok. I think I lean more towards female leads that can wield a knife, or a sword, or a gun. Not faith and tattoos. I’m not saying those things aren’t great, and weapons too, I just appreciate the physical strength in a lead character.

Overall, I believe Beauty Awakened was a sweet, slightly watery paranormal romance. We do have some good action scenes as the angels fight their battles with evil, I have to add that in there. Would I recommend this book to other readers? Well, if you are a follower of Gena’s series, I would continue. As with most series, there are sometimes filler books, and I think that is what this might be, so I will give the series another book or two. I was really hoping that the next book would be Koldo’s partner, but it looks like it might be Thane. He has more bad boy in him so I think I might like him more.