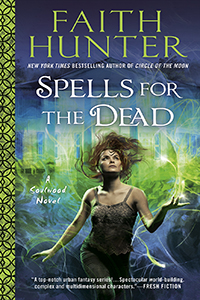 Nell Ingram is a rookie PsyLed agent, using the powers she can channel from deep within the earth to solve paranormal crimes. Together with her team, she’s taken on the darkest magic and the direst foes. But she’ll need to tap into every ounce of power she has for her newest case.

Nell is called to the Tennessee mansion of a country music star and finds a disturbing scene—dead bodies rapidly decaying before everyone’s eyes. The witch on her team, T. Laine, knows this can only be one thing: death magic, a rare type of craft used to steal life forces. PsyLed needs to find this lethal killer fast. But when a paranormal-hating FBI agent tries to derail the investigation, they find themselves under attack from all sides.

The stairway ended in a landing centered in the tan-carpeted basement. Musical instruments were everywhere, hanging on the walls, on stands in rows along the walls, in cases stacked in a corner. Set up as if to play or practice were three sets of drums and several types of cymbals, a rack of things that looked like kids’ rattles, three electronic pianos and organs, a series of bells, xylophones, and glockenspiels, and a white baby grand with the Bechstein logo above the keys. There was a body in a spreading wet circle in front of one case of instruments and a larger wet place in the carpet near her, the dampness extending beyond the taped outlines applied by the local LEOs.

I walked closer to the body and paused before taking three steps back. I did not need to see it again. It reminded me of bodies pulled from rivers, the skin slipping away from gooey, almost soapy tissue beneath.

Avoiding the wet spots, my bio-suited feet shushing on carpet that puffed with dust, I moved to the wide double French doors and partially opened the closed shades that covered the multipaned windows. Beyond the doors was a pea-gravel drive. I pretended to study the view, though that was more to give myself time to process what I had seen than to look out. Beyond the glass-paned doors I could see part of the barn, a large watering trough, the horse walking machine, and a length of four-board white-wood post-and-rail fencing. There was also what looked like a swimming pool with a horse in it, and two young girls standing on the cement edge, attending it.

The horses had a swimming pool. I shook my head.

Five teenage girls were sitting on top of the fence, watching the house. I made a mental note to get their names, get the names of everyone in or near the house in the last two days since Stella Mae got home from her tour.

With my stomach back under control, I closed the blinds and rejoined T. Laine, who was still standing near the body. It looked as if it had been dead for days, maybe lying in a steam room. She was wearing a three-quarter-sleeved T-shirt and jeans and was lying facedown, her hands under her torso as if she had tried to catch herself when she collapsed. The flesh I could see was at the neck, jaw, one elbow, the bottoms of her bare feet, and her dried crinkled hair. The body was swollen, stretched, dark with lividity, the skin bubbly under the surface. I couldn’t see her face and I was glad of that.

Check out all the tour stops at LTP

Faith collects orchids and animal skulls, loves thunder storms, and writes. She likes to cook soup, bake homemade bread, garden, and run Class III whitewater rivers. She edits the occasional anthology and drinks a lot of tea. Some days she’s a lady. Some days she ain't.
For more, see www.faithhunter.net
To keep up with her, like her fan page at Facebook: https://www.facebook.com/official.faith.hunter