June is Audiobook Month, and today we are going to celebrate by giving away a copy of the winning audiobook in the fantasy genre of the 2014 Audies! Presenting A Wisp Of A Thing by Alex Bledsoe and narrated by Stefan Rudnicki. Published by Blackstone Audio. 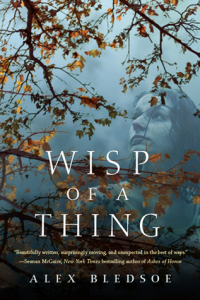 Touched by a very public tragedy, musician Rob Quillen comes to Cloud County, Tennessee, in search of a song that might ease his aching heart. All he knows of the mysterious and reclusive Tufa is what he has read on the internet: they are an enigmatic clan of swarthy, black-haired mountain people whose historical roots are lost in myth and controversy. Some people say that when the first white settlers came to the Appalachians centuries ago, they found the Tufa already there. Others hint that Tufa blood brings special gifts.

Rob finds both music and mystery in the mountains. Close-lipped locals guard their secrets, even as Rob gets caught up in a subtle power struggle he can’t begin to comprehend. A vacationing wife goes missing, raising suspicions of foul play, and a strange feral girl runs wild in the woods, howling in the night like a lost spirit.

Change is coming to Cloud County, and only the night wind knows what part Rob will play when the last leaf falls from the Widow’s Tree…and a timeless curse must be broken at last. 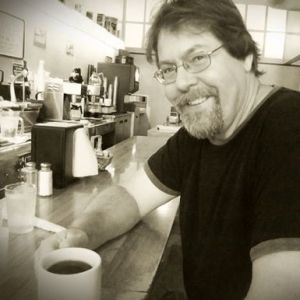 About the Author:
I grew up in west Tennessee an hour north of Graceland (home of Elvis) and twenty minutes from Nutbush (home of Tina Turner). I’ve been a reporter, editor, photographer and door-to-door vacuum cleaner salesman. I now live in a big yellow house in Wisconsin, write before six in the morning and try to teach my two sons to act like they’ve been to town before.