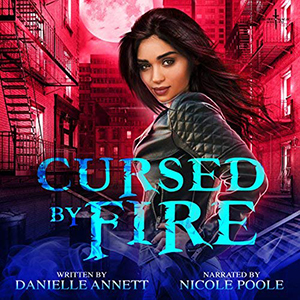 Blood is going to spill...

I just hope it won’t be mine.

After two weeks of searching, I found the seven-year-old I'd been hired to find too late. His body broken and discarded. Dead.

My boss doesn't want me to hunt down his killers. It's too dangerous.

But the Pacific Northwest Pack steps in, hiring me to bring the bastards to justice.

Turns out the kid was half shifter. And shifters don't abandon their own.

In a search that takes me through the maze of shifter hierarchy and the depths of the paranormal underworld, these killers underestimate how determined I am to mete out their punishment. Vigilante justice is the only kind these people understand.

Yes, blood will spill. And I'm determined it will be theirs.

Cursed By Fire is book one in the Blood & Magic series by Danielle Annett. It is an introduction to a world where shifters and vampires have come out to the world but the peace between all the races is tenuous.

In Cursed By Fire, Ari is a PI investigating a disappearance of a little boy. When the boy is found dead, her boss is determined that she should let it lie, but The Northwest Pacific pack hires her on to work with a long time friend and find out who would kill that boy who turned out to be shifter.

Ari struggles with the powers she does have and is constantly trying to control them. It is dangerous for her to reveal her powers. As the investigation goes on we delve into not only the shifters and vampires, but the humans and psych races as well. They try to pull Ari into their beliefs but she can see where they are going and will not be fooled, despite being lured by a hot guy that turns her inside out.

I see where we were headed with the story and Ari’s alliance does not surprise me. The story comes to a conclusion, but I really don’t feel like it is final. I understand the series goes on and we need the overall series arc, but I felt like this book just kind of ended suddenly. There are a lot of threads open and a lot of ways this series could go. I’m hoping that it is just book one syndrome that I suffered with this book.

I had a hard time listening despite being narrated by one of my favorite narrators, Nicole Poole. I think the story was going in so many directions trying to get a story in at the same time as building a world that I couldn’t focus. I will try book two, as I always like to give a series a second chance to make sure it was not just book one syndrome for me. I hope the series improves as I understand the world and characters a little better.

Audio Excerpt
The second book in the series,
KISSED BY FIRE also available in audio! 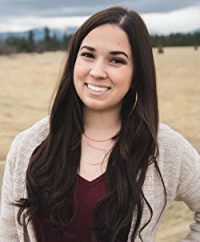 I’m just a girl with an obsession for Marvel movies, a love of all things Urban Fantasy, and a cheerleader for the underdog in any given story.

If you’re looking for a heroine you can root for … someone who defies the odds and gets up every time they’re knocked down … then look no further because that’s what you’ll find in my books.
I hope you’ll join me in Aria Naveed’s adventures. She’s pretty badass if I do say so myself.
And if for some strange reason you want to know more about me, check out my website www.Danielle-Annett.com  and catch me on facebook https://bit.ly/2t588Uu
Also don’t forget to sign up for my newsletter so you never miss a new release: https://www.subscribepage.com/y7i0o9
**THESE ARE DANIELLE’S AVAILABLE TITLES**
THE BLOOD AND MAGIC SERIES
Cursed by Fire — Out Now
Kissed by Fire — Out Now
Burned by Fire — Out Now
Branded by Fire — Out Now
Consumed by Fire –Out Now
Forged by Fire — Coming 2019