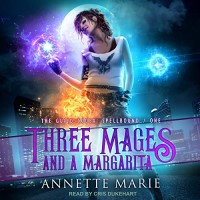 Broke, almost homeless, and recently fired. Those are my official reasons for answering a wanted ad for a skeevy-looking bartender gig.

It went downhill the moment they asked me to do a trial shift instead of an interview — to see if I'd mesh with their "special" clientele. I think that part went great. Their customers were complete dickheads, and I was an asshole right back. That's the definition of fitting in, right?

I expected to get thrown out on my ass. Instead, they… offered me the job?

It turns out this place isn't a bar. It's a guild. And the three cocky guys I drenched with a margarita during my trial? Yeah, they were mages. Either I'm exactly the kind of takes-no-shit bartender this guild needs, or there's a good reason no one else wants to work here.

So what's a broke girl to do? Take the job, of course — with a pay raise.

--
Note: The three mages are definitely sexy, but this series isn't a reverse harem. It's 100% fun, sassy, fast-paced urban fantasy.

Three Mages and a Margarita by Annette Marie was a fun dip into the world of the magical!

Tory is a big character. She has attitude issues that would make you laugh. The opening scene alone let me know I was in for a treat. When she finds a place that actually puts up with her temper and doesn’t fire her for throwing margaritas in a customer’s face, she thinks she is set. But is this bar what she really thinks it is. No one is sure how Tory was able to actually enter the bar, so it is a big surprise to everyone that she is human. I was kind of disappointed that she was human because I thought with a character like Tory, she should have some kick ass power. However, I found out quickly that Tory can take care of herself. She heads straight into trouble without thought to what she is actually up against. I still kind of wish she had powers though. Tory’s reaction to help the guild starts to turn around some of the member’s feelings about her, which is a great help since when they found out she was human she had to deal with a whole range of reactions.

The three mages are the first of the friends Tory makes at the bar, and they are definitely her protectors. She even tries to protect them. Actually succeeding sometimes. Great for a human! There really isn’t a romance thread, despite Aaron wanting to ask her out. Each of the guys plays a role in Tory’s life as friends. There is comfort and friendship but no real romance. That didn’t matter. I was still kind of rooting for one. Hoping that Aaron and Tory would get together. It’s still a possibility, so we’ll have to see with the next book!