I don’t know where August went, but it flew by like it didn’t even happen. I’m looking forward to the cooler days of fall. August may have flown by but it wasn’t without a lot of time spent in a slump. Things were hard in August in more ways than one so I’m definitely glad it is over. I’m hoping September will be an uplifting month.

After contemplating for a long time, it was decided that it was time for our girl Posie to cross the Rainbow Bridge. It was such a hard decision, and it’s still so raw that I get emotional all the time. We are going to miss her so much. She was our demanding, vocal girl who made sure to keep everyone on schedule. She was amazing. 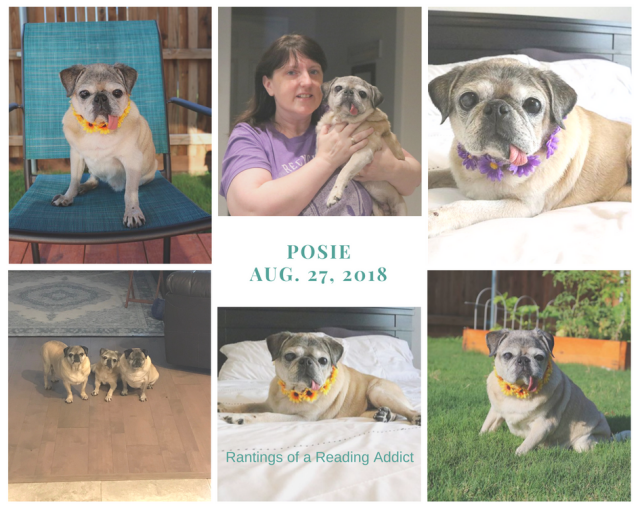 August also brought our 25th wedding anniversary. It feels so strange that it has been that long! My parents held a little get together for us with just family. We got some great pictures although we are missing my daughter in law which bummed me out, but maybe we’ll get the chance over Christmas. Everyone here hates getting their picture taken so it’s always a BIG deal. It drives my mother nuts, and in a way I kind of regret not having more pictures of my family than I do, but man, that camera drives me crazy! 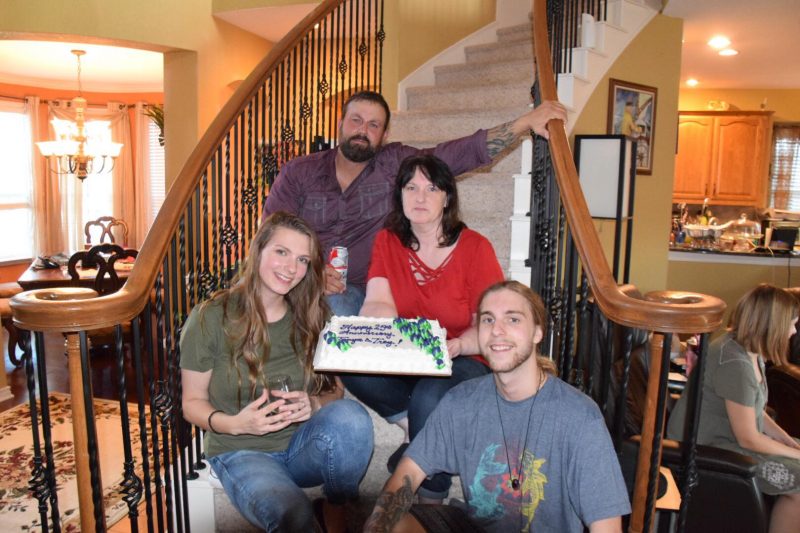 So let’s get to my budget. It is not looking good. Two signed books came up for sale and we all know my obsession with that. It was almost 3 but the signing with Ilona Andrews fell on my anniversary and I didn’t want to cut out on my husband. That saved me buying a copy there. The problem with all this is that I have NO money left in my book budget which means I went in the hole. I still have money budgeted for one event that I may have to just move down to books to make up for it. There is also Readers & ‘Ritas coming up in November and I’m starting to think I may go too far in the hole if I add in that con. I’m feeling pretty guilty. Anyway, this is what my numbers looked like for August.

I’m actually kind of sad that I’ve put myself in this position. Now comes the question, will I work to make this budget work for the rest of the year, or am I going to totally blow it and allow myself to dig myself into a hole. We’ll have to see what strikes my mood. My biggest purchase for books was the virtual signing for Consumed by J.R. Ward. It came out of the budget this month but won’t show up in my haul until it’s release in October. Such torture. I would have held out and got it signed at Booklovers Con, but it is looking unlikely that I will be attending so the cheapest option is to do the VS. Click the link to grab one for yourself, they are still for sale. Let’s take a look at the books I did receive this month.

So Stygian by Sherrilyn Kenyon was my signed copy I got from B&N. Normally I do not open any of my book packages until I do my IG story book haul at the end of the month. However, when I got home from work and the package was on the counter, it was extremely light and something was shaking inside. I was baffled so had to take a look inside. What did I find? A box of Armor All Wipes. Somehow my husband was able to get the book out of the packaging, difficult considering the size of Stygian, and stuck in the box of Armor All to throw me off. He seemed to think this was hilarious as I was freaking out thinking I had to contact B&N because they sent me the wrong thing! Smartass!

I’m trying to decide if I’m just going to do an IG TV video for my book haul this month or continue to do a story. When I break down the video for the story, I can’t get them all highlighted so they stay available. I wonder if doing a video that doesn’t show me personally, is kind of lame. I might try it, we’ll see. This month is going to be a big one, which is another reason I’m debating on the alternate method because I have all the books from Literary Lovers Savannah to show off as well.

How was your August? Did you do a lot of reading in the sun? Also, a question. Would you guys like it if I just posted my book haul videos in these Bookish Life posts? Then you can see them whenever you want instead of trying to catch them on IG? Or maybe I should do a FB live. However, I don’t know if that would get enough views. What do you all think is the best way to do this? Have any of you actually seen one of my IG stories?