Posted May 25, 2016 by Tanya in Spotlights, Waiting on Wednesday / 4 Comments

This is one of my most anticipated books of the year. This series has me hooked and I can’t wait for its release. As you’ll see, there is an amazing preorder giveaway going on right now, so read on my friends for your chance at some great prizes!

The Queen of Paranormal Romance, New York Times and USA Today bestselling author Gena Showalter, returns with THE DARKEST TORMENT, the eagerly anticipated twelfth novel in her Lords of the Underworld series, available May 31, 2016! Pre-order your copy today!

New York Times bestselling author Gena Showalter returns with her most explosive Lords of the Underworld tale to date, about a fierce warrior on the brink of sanity who will stop at nothing to claim the exquisite human with the power to soothe the beast inside him…

Driven to his death by the demon of Distrust, Baden spent centuries in purgatory. Now he’s back, but at what cost? Bound to the king of the underworld, an even darker force, he’s unable to withstand the touch of another…and he’s quickly devolving into a heartless assassin with an uncontrollable temper. Things only get worse when a mission goes awry and he finds himself saddled with a bride—just not his own.

Famed dog trainer Katarina Joelle is forced to marry a monster to protect her loved ones. When she’s taken hostage by the ruthless, beautiful Baden immediately after the ceremony, she’s plunged into a war between two evils—with a protector more dangerous than the monsters he hunts. They are meant to be enemies, but neither can resist the passion burning between them…and all too soon the biggest threat is to her heart.

But as Baden slips deeper into the abyss, she’ll have to teach him to love…or lose him forever.

Check out this exclusive graphic teaser we have for
THE DARKEST TORMENT! 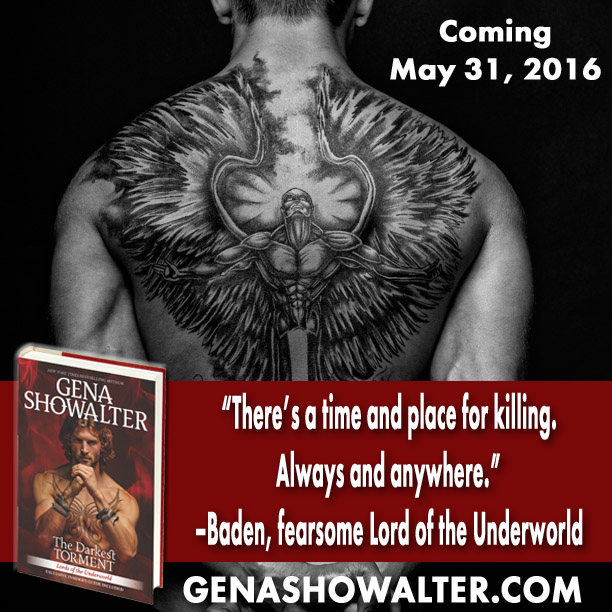 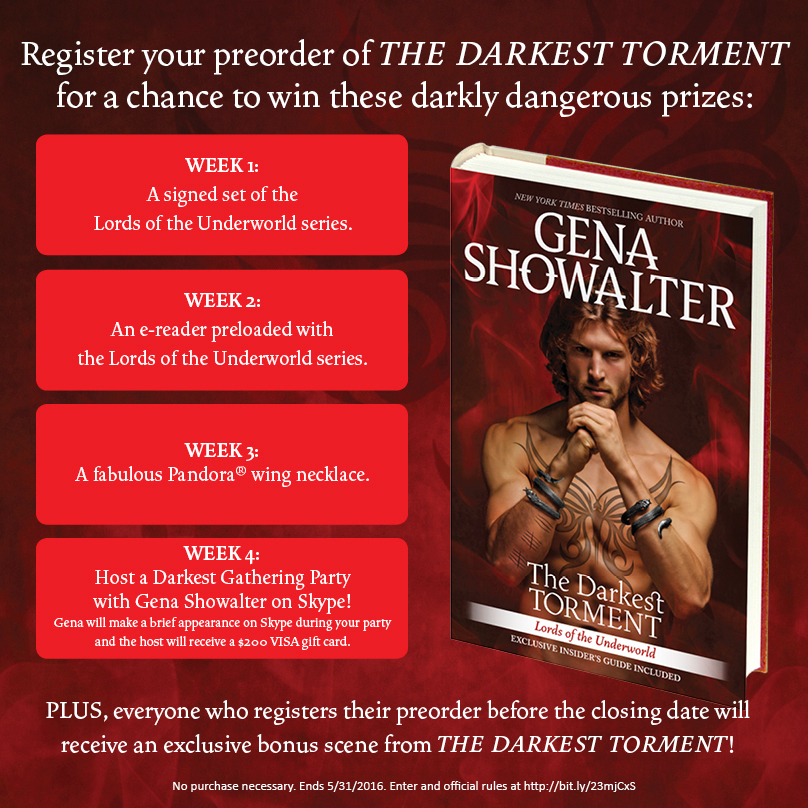 Pre-order your copy of THE DARKEST TORMENT by Gena Showalter, and each week, be entered to win 1 of 4 darkly dangerous prizes! Just fill out the form!

Gena Showalter is the New York Times and USA TODAY bestselling author of the spellbinding Lords of the Underworld and Angels of the Dark series, two young adult series–Everlife and the White Rabbit Chronicles–and the highly addictive Original Heartbreakers series. In addition to being a National Reader’s Choice and two time RITA nominee, her romance novels have appeared in Cosmopolitan (Red Hot Read) and Seventeen magazine, she’s appeared on Nightline and been mentioned in Orange is the New Black–if you ask her about it, she’ll talk for hours…hours! Her books have been translated in multiple languages.

Waiting On Wednesday ~ How To Love Your Elf by Kerrelyn Sparks