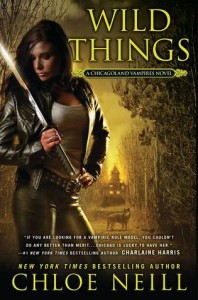 Since Merit was turned into a vampire, and the protector of Chicago’s Cadogan House, it’s been a wild ride. She and Master vampire Ethan Sullivan have helped make Cadogan’s vampires the strongest in North America, and forged ties with paranormal folk of all breeds and creeds, living or dead…or both.

But now those alliances are about to be tested. A strange and twisted magic has ripped through the North American Central Pack, and Merit’s closest friends are caught in the crosshairs. Gabriel Keene, the Pack Apex, looks to Merit and Ethan for help. But who—or what—could possibly be powerful enough to out-magic a shifter?

Ah!  So nice to be back in the world of the Chicagoland Vampires!  It was a wild ride!

We have two issues throughout this Wild Things.  We have the crazy-ass mayor trying to pin whatever she can on the supernaturals of the city, namely Ethan, then we have the supernaturals that are going missing.  At first I was disappointed that Ethan went out to the Brecks when things were going south with the mayor.  It didn’t seem like him, but I do agree that it was probably safest.  Especially considering what happens to the other masters.  It also puts him in the prime position to be part of the shifter’s big party.  Of course, the party goes south and the vamps get caught up in the investigation of a missing shifter.  Then to keep the peace, they must also find a missing supernatural of a supposedly extinct species.  I absolutely loved the shifter part of the story.  You don’t get to see much of Gabriel Keene and the North American Central Pack.  They have their own political problems and can see why they try to stay under the radar in the city.  I especially love that Gabriel’s wife has the same name as me.  🙂  Another great aspect of having the shifters involved is we get more Jeff Christopher.  We see him more in the crime-solving aspect and not so much in his relationship with Fallon, so it was good that he got his own novella in Howling For You.

Wild Things brings more information on Gabriel’s mysterious prophecy from a few books ago.  It is exciting and I am going nuts just trying to figure out the mechanics of it, and how it will fit into the newly formed plans for Ethan & Merit and their upcoming adventure they are starting.  I am giddy just thinking of it.  Ethan must first deal with the nutcase mayor and get his people safe.  If Ethan is anything, he is a great leader and very smart.  If anyone can stop her, it would be Cadogan House.  Seems they do most of the work for the vamps of the city anyway.  Scott is supportive but Morgan is just in la-la land.  Neither wants to dig right into the issues though.  Although, Scott does do well protecting Ethan when he is taken into custody.

Wild Things shows great progress in a lot of relationships.  I especially look forward to more involvement of Lindsay and Mallory.  Both friends create such great scenes with Merit that I always end up grinning.  Ethan and Merit definitely have a solid relationship and are very unashamed and public about it.  I love it!  They are a great super-couple.  I also must mention, don’t read this book when you are hungry!  Being Chicago, food is talked about a LOT.  I couldn’t believe that Merit had never tried the concoction the new Cadogan House guard introduces to them.  I’ve had it and it is great.  I thought Merit would be more adventurous than that, but I’m sure food curiosity will get to her and she’ll have to try it.

The resolution takes some interesting turns and brings in some characters we thought were gone.  The ending battle itself was kind of lacking, quite short actually, but the rescue itself was well planned and shows how great the vamps and other supernaturals can work to keep Chicago safe.

This book was definitely a great mystery.  The investigative skills of the Cadogan House team, Jeff Christopher and a few of other supernaturals are really challenged with this one.  Despite the blurb for Blood Games mentioning it, I am sure that some of the story line is going to take us outside of Chicago.  I am excited and can not wait for Blood Games!