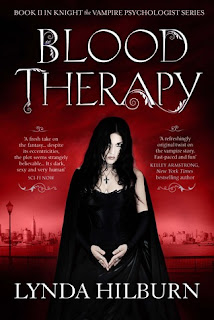 Blood Therapy is a dark contemporary fantasy with humor, mystery, romance and adult situations.
Kismet Knight knows exactly how to handle her clients, but when it comes to her love-life, she’s on less steady ground. That was until she met master vampire Devereux, an 800-year-old hunk, who not only managed to convince the entirely rational shrink that vampires really do exist – he also persuaded her to start dating him.
Kismet’s still having nightmares after being kidnapped by Lucifer, a psychotic vampire. From a therapeutic perspective she finds his split personalities fascinating – but she’s constantly terrified. And Dev’s become obsessed with finding Lucifer – before he comes after Kismet again.
So much for her nice, ordinary life…

On the surface, it appears that after her initial discovery of the world of vampires, she has finally settled in and come to grips with it all. She is even providing group therapy sessions for the nearly turned. Unfortunately, it is all on the surface. She still constantly fights the fear the vampires cause in her and continues to question her sanity. This bothered me. She should be afraid of Lucifer, but I was really hoping she would be better with all the others. Especially Devereux. I think Kismet really needed him around more to help her with this new world. But he is very busy doing what he can to ensure Lucifer is caught and there is no more threat to Kismet.

In comes Alan. In book one I was not a fan of Dev. I just had a different vision of him that I think might have been off. In this book though, his connection to Kismet has endeared me to him more, which in turn makes me not like Alan. It’s this whole triangle thing. I am just not a fan of them. It is even more difficult that Kismet needs to prove to herself that she has feelings for Dev because she actually has those feelings or because Dev is doing his vampire thing on her to make her have those feelings. Alan makes a good friend, but he is not what Kismet needs.
I definitely enjoyed Blood Therapy more than The Vampire Shrink. I still felt a lot of frustration at the characters and their actions, but the book did have some good twists and turns in the search for Lucifer. Blood Therapy is a good 3 stars for me.