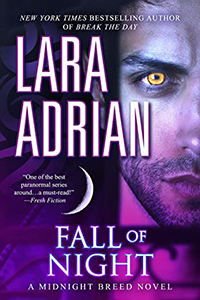 Breed warrior Micah is one of the Order’s best, his reputation for cold justice and lethal skill rivaled only by that of his formidable father, Tegan. So, when a mission Micah’s leading in an off-limits area called the Deadlands goes terribly wrong, leaving him the sole survivor of an apparent Atlantean attack, he won’t rest until he has answers…and vengeance for his fallen team.

Phaedra thought it was only a dream, a hideous nightmare. Yet somehow, she had been transported from her life in Rome to a stretch of barren forest when it suddenly lit up with unearthly fire, obliterating everything in its path—including the fiercely handsome Breed warrior she’d encountered in the dream. Or so she believed, until their paths cross again and Phaedra finds herself, and her Atlantean people, at the center of Micah’s wrath.

With tensions between the Breed and the Atlanteans already edging toward war, and another powerful nemesis growing bolder by the day, uncovering the stunning truth about what happened in the Deadlands will force Micah and Phaedra to work together in an alliance forged by fate and an undeniable desire neither of them can resist.

LOOK at that cover! It is so captivating and just gives me shivers. Lara Adrian picked a stunning cover for Micah and his story!

On January 31, 2021, Lara Adrian releases the newest in the Midnight Breed world. Those of us that have been through the whole series know that the storyline has moved onto the original Breeds children as well as some of the Hunters that were released 20 years ago. The Fall of Night is the child of Tegan who is one of the fiercest Breeds in the Order. Micah needs to prove himself in this war against the Atlanteans.

This time hop has brought many different characters, however the Order’s enemies will be familiar. I’m excited for Micah’s story. Watch for it at the end of the week, on January 31, 2021! 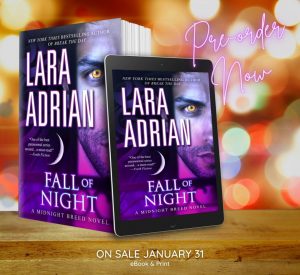