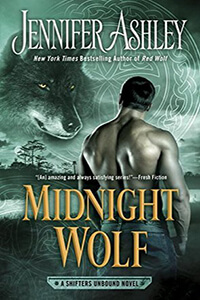 Angus Murray, bouncer for a New Orleans Shifter bar, is sent to round up an elusive, Collar-less Shifter woman, Tamsin Calloway, who is causing trouble for Shifter Bureau, and possesses information they want. If Angus refuses, he risks losing his cub. He finds Tamsin but she’s slippery and not about to be rounded up quietly.

In fact, quiet is nothing Tamsin will ever be. She leads Angus on a wild chase, but he’s determined to bring her in to save his son.

Can Tamsin convince Angus she’s worth helping before she’s locked away by Shifter Bureau, Collared, or perhaps killed?

I feel like I have been waiting forever for Midnight Wolf to come out! I binged this series, and still have some reviews to do to catch up. I read them faster than I could review them. This series is THAT good people! Midnight Wolf releases April 24, 2018. Get caught up in the series, get your preorder in, whatever you need to do to be prepared for this release! It is one of my most looked forward to of the season!