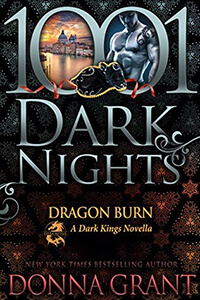 Gianna Santini has one love in her life – work. A disastrous failed marriage was evidence enough to realize she was better off on her own. That is until a handsome Scot strolled into her life and literally swept her off her feet. She is unprepared for the blazing passion between them or the truth he exposes. But as her world begins to unravel, she realizes the only one she can depend on is the very one destroying everything – a Dragon King.

I am so in love with this series. I mean, seriously, dragons! The plot has been thickening over the last eleven books, and it feels like we are getting closer and closer to the final confrontation. I am hoping we get to see more of the mysterious Druid.

Dragon Burn is a novella, and as I have found so far, they are good little nuggets to sink your teeth into. Even if you haven’t read the rest of the series. They pretty much stand on their own. I’m still going to keep my fingers crossed for some movement on the war front.

Dragon Burn is part of the 1001 Dark Night’s franchise. It releases August 22, 2017. So far, I only see buy links at Amazon, but it might pop up at the other retailers closer to it’s release day. I can’t wait to get some more of these Dragon Kings!