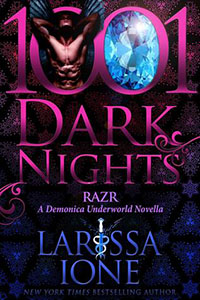 A fallen angel with a secret.

An otherworldly elf with an insatiable hunger she doesn’t understand.

Meet mortal enemies Razr and Jedda…and the priceless diamond that threatens to destroy them both even as it bonds them together with sizzling passion.

Welcome back to the Demonica Underworld, where enemies find love…if they’re strong enough to survive.

We’re going back to the Underworld! These novellas from the Demonica Underworld are appeasing me a bit since the series ended. They are very much standalone with only small glimpses into any of our previous characters or even Underworld General at all. Still though, I understand how this world works already so we can dive right into the meat of the story. Don’t worry though if you are reading this without any of the other books in the series. These novellas stand very much on their own as well. You won’t feel cheated. Larissa Ione is very good at writing these smaller novellas for the 1001 Dark Night compilations.

These are two new characters that I know nothing about so this is going to be a big surprise for me. I’m excited just to dig in, learn about them and their story. I am really curious about what other characters from the previous books we might see. Just a snippet will keep me happy!

Razr releases April 11, 2017. So far I only see it on sale for preorder at Amazon, so you might want to check closer to release date for your other retailers. If you are a Demonica junkie like myself, you are going to want to grab this immediately!