This is so exciting! I’ve been reading the Ivy Granger series for some time and now we are getting presented with the newest cover. This is the fifth installment of the Ivy Granger urban fantasy series by E.J. Stevens. Today this cover will be revealed to the earth along with a giveaway and sneak peek at the book. That makes today a great day doesn’t it? Let’s get to it! 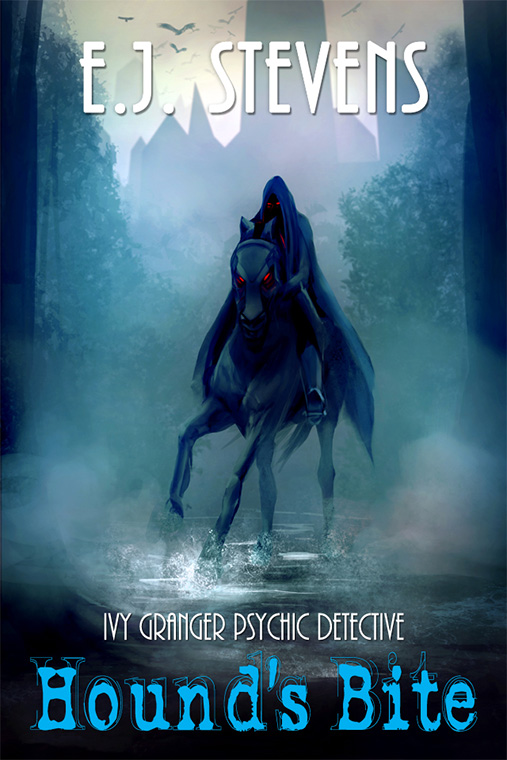 Ivy Granger thought she left the worst of Mab’s creations behind when she escaped Faerie. She thought wrong.

In a cruel twist of fate, Ivy has unleashed a powerful horde of Unseelie beasts upon her city, turning her homecoming into a potential slaughter of innocents. Now Ivy must gather her allies to fight a reputedly unstoppable force—The Wild Hunt.

Will the training Ivy received in her father’s court be enough to save her city, or will Harborsmouth be forced to kneel before the Lord of the Hunt? She is willing risk her own life, but some sacrifices come at a cost worse than death. When an ally is bitten by one of The Wild Hunt’s hounds, Ivy must face the possibility that winning this battle may mean killing the one person she has come to love most.

Let’s get a sneak peek at Hound’s Bite!

“Are you saying we should run?” I asked, eyebrows raised. “Because you should know me better than that.”
“What he’s saying, Princess is that you woke up something too big for the three of us to defeat alone,” Torn said.
That made me pause. We’d fought faerie queens, pyro demons, a lovesick necromancer, and a psychotic lamia, to name a few. I may not have come through those battles unscathed, or with all my guts still on the inside, but with my friends at my side, and a new arsenal of wisp powers at my fingertips, I felt nearly invincible.
I looked to Ceff, hoping he’d grab his trident and join me for some quick monster cleanup. I may not be on the clock for this one, but I didn’t let hungry fae prowl the streets of Harborsmouth. And if Torn was right, I’d somehow let this one follow us out of Faerie. No way was I turning tail, no matter how tired I was.
But Ceff didn’t reach for his weapons.
“We need allies,” he said.
“And larger weapons,” Torn said, with a wink.
The cat sidhe looked excited, which was a clue that I wasn’t going to like the answer to my next question.
“And what monster do we need to gather our allies and weapons against?” I asked.
“Haven’t you guessed yet, Princess?” Torn asked, eyes gleaming. “We’re not just facing one howling beast.”
Ceff turned to me, closing the space between us. In the moonlight, I could see my reflection in the dark pools of his kelpie eyes—eyes that were tight with worry.
“What are they?” I asked.
Ceff’s voice was low and reverent, and tinged with the taint of fear.
“The Wild Hunt.”

I know you guys are all anxious for release now, but let me distract you with one more thing…. a GIVEAWAY!