Today we are celebrating the release of BURNING BRIGHT, the third full-length novel in the
Ivy Granger urban fantasy series by E.J. Stevens.  Let’s party!

We have two very special book excerpts to share with you and, of course, A GIVEAWAY!

Keep reading for a chance to win. 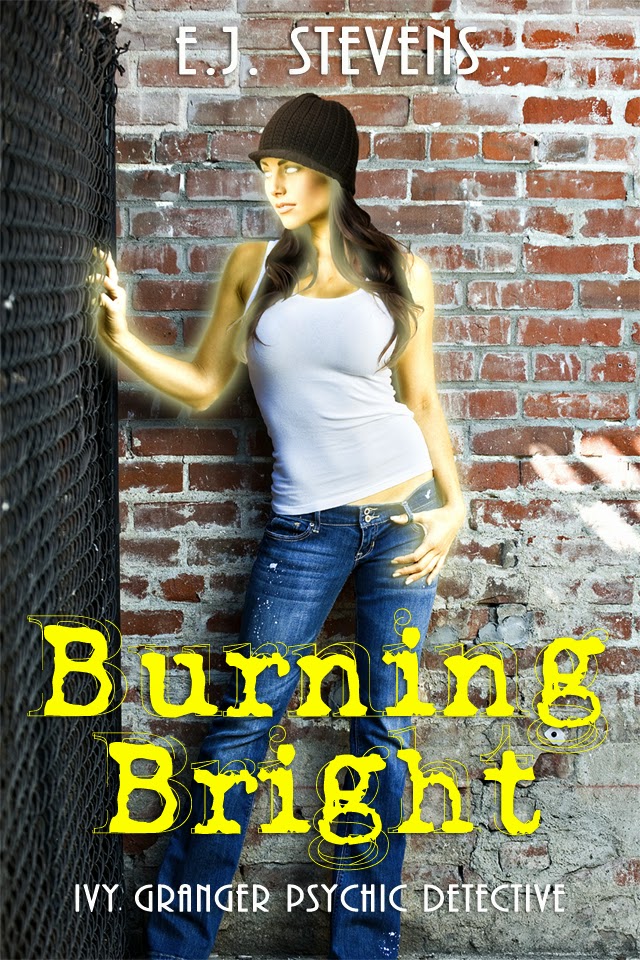 Burning down the house…

Things are not going well at the offices of Private Eye. Jinx is
having demon problems, the city is overrun with pyromaniacal imps,
and Ivy’s wisp powers are burning out of control, attracting the
attention of both the Seelie and Unseelie courts.

Along came a faerie queen… It’s the worst possible time for the
Green Lady to call in a favor, but Ivy’s bound by her deal with
the glaistig. Too bad there’s no wiggle room in faerie bargains.

Ivy must rid the city of imps, keep Jinx from murdering her one
solid link to Hell, and fulfill her bargain with the Green
Lady–with sidhe assassins hot on her tail.

Previous books in this series:

My first impression of Emain Ablach was that it was wet.  Very, very
wet.  But I didn’t have much time to think about that fact.  I was too
busy drowning.

I struggled to swim to the surface—wherever the hell that was—the weight
of my clothes, leather jacket, and weapons weighing me down.  My lungs
burned and my brain screamed at me to find a way out of this wet
torment.  I needed air, badly.

I forced my eyes open, salt and whatever else was in the water burning
like acid, but being able to see my surroundings didn’t help matters.
It did, however, make me glad for quick reflexes and muscle memory.

At the first sign of my assassin stalkers, back in a Harborsmouth alley,
I’d grabbed one of my throwing knives.  I may not be able to throw it
now, not in this water, but the pressure of the blade in my gloved hand
made it easier to face the grinning corpses smiling back at me.

There were hundreds of them.

Bloated bodies in every state of decomposition drifted at the ends of
seaweed infested chains that rose up from the ocean floor.  I would have
assumed that the people on the ends of those chains were dead, a
warning to anyone foolish enough to trespass here, except for the hands
reaching outward and the curve of their rotting lips.

Grins like frightened, blue worms curled up toward vacant eyes.  The
eyes, or what was left of them, were coated in a white film and looked
as though they’d been nibbled on by grazing fish.  The chained corpses
may not be able to see, but I had no doubt that they could sense my
presence.  Their hands clawed at the water and their faces were all
turned in my direction.  Perhaps they could scent me, like sharks on a
blood trail.

Now that was a cheery thought.

I kicked away, trying to put more distance between myself and the
grasping dead.  I recoiled as my boot hit something squishy.  Mab’s
bones, I didn’t realize there was a chained corpse that close to where I
swam.  I did not want to touch these things or the chains that bound
them.  Those were visions I’d never survive.

The delay alone would kill me.

Heart pounding, I propelled myself upward, but I had a nagging suspicion that I wasn’t going to make it.  I’d sunk too deep into this watery
hell.  Already my lungs burned and dizziness sent my head spinning like a
ride on an otherworldly merry go round.  My limbs were cold and heavy
and I could barely feel the knife in my hand.

How ironic would it be to die here, within spitting distance of a tree that grew magical apples
capable of reviving the dead?

Air bubbles sprung from my nose and I fought not to breathe.  Inhaling
water would mean my death.  I made one more sluggish stroke through the
water and felt strong hands grip my waist and haul me upward.  I was
sailing through the water, away from greedy hands and the hundreds of
faces that grinned hungrily after me.

My rescuer was a strong swimmer and I doubted Torn would have gone to so
much trouble to save me.  I felt a tingle of energy zing through my
system, helping me to hold onto the slippery tendrils of consciousness.
Ceff, it had to be Ceff.

I gasped as my head broke the surface of the water, gulping air and
choking on a mouthful of water.  I coughed up phlegm and who knows what
else—with those corpses steeping down below, I didn’t want to think
about it—and pushed wet, bedraggled hair from my face.  I was alive, but
it wasn’t pretty.

I grimaced and pushed the floating evidence of my humiliating coughing
fit away.  Ceff had a grip on my jacket, still helping to keep my head
above the water’s surface.

“Are you alright?” he asked.

With his wet hair slicked back from large, dark green eyes and his
chiseled jaw, he looked gorgeous.  He was completely in his element
here, unlike his half-drowned girlfriend.

“I just swallowed a gallon of salty corpse tea and sea monkeys,” I said, a rueful grin on my
face.  “I’ve been better.”

Book Excerpt #2 (Spiders, why does it have to be spiders?)

“Have you both lost your minds?” Torn asked.

“What would you have us do, leave them here to become spider food?” I asked.

I shook my head.

The last I yelled at the cocoon.  I didn’t know if the person inside
could hear me, or how far gone they were if they could, but I had to try
to comfort them.  Plus, I really didn’t want to risk maiming the person
I was trying to save.

“You have no idea what kind of monster is inside that thing,” Torn said.

I scowled at Torn.  No one deserved to be hung out like prosciutto and gobbled up by
some huge spider.

“This is a hero’s path,” Ceff said.  “It is highly probable that they are honorable.  If
not, at least we tried.”

Torn sighed and shook his head.

“Ready?” Ceff asked, holding the bundle as still as he could.

“I was born ready,” I said, doing my best tough guy impersonation.

I carefully cut away at the tough fibers of the cocoon.  Almost there…

Thousands of baby spider fae poured out of the cocoon, skittering in
every direction.  Except it wasn’t a cocoon.  It was an egg.  I
screamed—though I’d deny it if I lived long enough for Torn to tell
anyone—and stumbled away from the horde of spiders.  So much for my
tough guy act.

I stomped on the spiders as I backed away, halting their progress.  A
brave one ambled forward and sank it’s dripping mandibles into its
nearest kin.  The other spiders followed suit, joining in the feeding
frenzy.

“Oh, look, aren’t they cute?” Torn asked, pointing to where baby spiders were busy
cannibalizing each other.

I inched further up the trail, relieved to see that most of the spiders were too busy attacking each
other to notice my retreat.

“Perhaps we should have listened to the cat sidhe, just this once,” Ceff
said, whacking the more determined stragglers with his trident.

“I told you so, princess,” Torn said.

I flexed my fingers, hands itching to wring the cat sidhe’s neck and
wipe that smug look off his face.  Instead, I stormed past him and
around the corner.  I’d had it with this place and its creepy
inhabitants.  We needed to find Ailinn’s grave, grab a magic apple, and
get the hell out of dodge.

We are giving away SIX Ebook copies of BURNING BRIGHT by E.J. Stevens.

To enter, please use the easy peasy Rafflecopter form below. This giveaway is

Thank you for partying with us!