Posted January 19, 2016 by Tanya in Tell Me Something Tuesday / 6 Comments

This week’s question asks us who our favorite female audiobook narrators are.

When I was going through my list of female narrators I had listened to, I found there were only a couple that blew me away, but the rest were really good too. There were some of those Lords of Deliverance books that Hillary Huber was really good, then others I was kind of put off. Overall though I think this is the best of my group. It’s not very large. I’m not the most experienced listener and I’ve been doing series marathons. Normally (if I’m lucky) those series keep the same narrator throughout. It doesn’t give me a lot of variety or new narrators to pick from, but it drives me nuts when a series jumps around on its narrators.

I’m listening to Angela Dawe right now, and she just keeps getting better and better in this Psy-Changeling series. These are my favorites so far in my audiobook career. Who do you have at the top of your list? 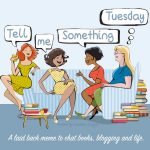 Tell Me Something Tuesday ~ How Has Your Reading Changed Since The Pandemic?

Tell Me Something Tuesday ~ Unpopular Opinion

Tell Me Something Tuesday ~ Picks For Winter 2017

Tell Me Something Tuesday ~ Who Are Your Favorite Authors