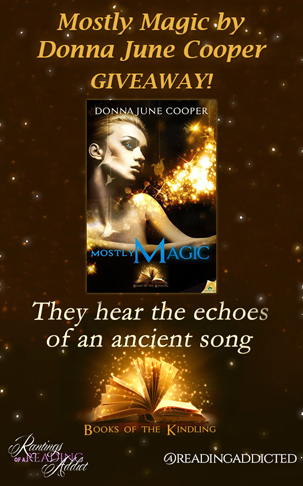 After all the excitement from our giveaway for More Than Magic by Donna June Cooper, we’re all set to give you the chance to win the second book in the Books of The Kindling series! This week, we will be giving away a beautiful signed copy of Mostly Magic, with maybe a little magic swag tucked in there. Daniel’s story is really great, with a spunky, fun heroine. 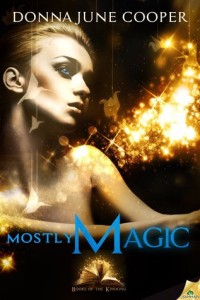 One terrifying premonition brings them together. Another will threaten their future.

Do dreams come true? Dr. Daniel Woodruff hopes they don’t, because his dreams predict a devastating future for him, for those he loves—and for the planet.

His latest premonition, which blows a huge crater in his eroding sanity, holds a singular horror—the loss of a wife and unborn child. Yet another reason he can let no one into his chaotic life, least of all a perky, persistent investigative reporter he finds simultaneously frustrating and fascinating.

Mel Noblett leaves no stone unturned in her one-woman crusade to save the environment. When a whistleblower in Italy proves too frightened to talk, Mel turns to a fall-back lead, an extremely eccentric, beekeeping professor who might just make the trip worthwhile.

Despite their instant attraction, Mel is relieved when Daniel keeps her at arm’s length. After all, she has a secret of her own—one that makes her preternaturally good at her job. And, when Daniel’s terrifying visions prove uncannily accurate and begin to revolve around Mel—it is a gift that could put her life in danger.

Warning: Reluctant seer of a bleak future meets petite force of nature who lights up the heart of his darkness. Where there’s smoke, there could be an unpredictable blaze of passion, but the rewards are oh, so sweet…

There are, of course terms and conditions to the giveaway. Please read them before entering so there will be no confusion later!