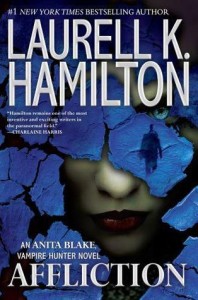 Some zombies are raised. Others must be put down. Just ask Anita Blake.

Before now, she would have considered them merely off-putting, never dangerous. Before now, she had never heard of any of them causing human beings to perish in agony. But that’s all changed.

Micah’s estranged father lies dying, rotting away inside from some strange ailment that has his doctors whispering about “zombie disease.”

Anita makes her living off of zombies—but these aren’t the kind she knows so well. These creatures hunt in daylight, and are as fast and strong as vampires. If they bite you, you become just like them. And round and round it goes…

Where will it stop?
Even Anita Blake doesn’t know.

Zombies! We finally got back to some zombies and Anita’s real job. It doesn’t start out as a job, but once we get to Micah’s hometown that is exactly what it turns into. The mystery as to who actually has control enough to control the zombies was even harder for me to figure out because honestly, I have forgotten who half of the characters are. Edward (Ted) did show up to have Anita’s back which I absolutely loved! He may not be a paranormal being, but he is definitely kick ass and has an attitude you can’t help but laugh at. Laugh despite him being a cold blooded killer. “Ted” can sometimes take old country boy over the top!

I loved that we went back to more action and mystery than all about the ardeur. It still plays a part, but it is squeezed in amongst the adventure. You still get the sex, but it is not the at the forefront where Anita is constantly trying to control it.

I am still not a fan of Micah and Nathaniel. It’s not that I want Richard back to help Anita and Jean Claude keep their group together, I would just prefer that her main squeeze be Jean Claude. Now with Jean Claude’s little surprise in Affliction, I was hoping that would be what we were headed for, but my hopes were dashed. It is very confusing to me on how they are all going to pull this romantic side together, but I also don’t know much about that kind of lifestyle. I just find Nathaniel so young, and Micah just not as, I don’t know, aggressive enough for Anita. Although Micah has some surprises he’s been hiding.

These books are already quite long, and there are some flashbacks to jog the memory, but I think I have a huge mental block. Maybe if I just reread the one where she conquers the great Mother of Darkness, I might have had an easier time. There are just so many characters and how they all get pulled into the group keeps my head spinning. Thinning out the group is a necessity at this point.

I’m conflicted on how I really feel with this one. I’m glad we are getting back to the adventures and Anita’s job as Marshall. The problem I’m facing is that after this many books I’m starting to lose track of all the battles and characters. I find I will pause at a flashback and try to pull that book out of my mind, but there are so many to sort through. Hopefully with closer spacing of releases I’ll be able to pull it all back together and get back on track.